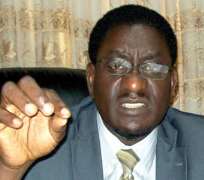 A Federal High Court sitting in Benin City, the Edo State capital and presided over by Justice Adamu Hobon issued the directive on Monday January 23, 2012, according to documents obtained by THEWILL Thursday.

“Bench warrant is hereby being issued for the arrest of the Hon. Attorney General of Edo State in the person of Osagie Obayuwana and be brought to court on the 30/1/2012 to answer committal proceedings against his office and person, that the commissioner of Police of Edo State is hereby ordered to cause the arrest be effected forthwith,” the judge ordered.

Hobon, also ordered the Police Commissioner to ensure that Obayuwana is brought before the court to answer committal proceedings against his person and his office on the 30th January 2012.

The order for Obayuwana’s arrest was made as a result of his failure to appear personally before the judge despite an earlier criminal summons to answer the committal proceedings filed against him by the company run by Indians.

Recall that Churchgate took over state owned Bendel Breweries when the state government under the Odigie Oyegun led administration sold off state assets to the private sector under its privatization programme.

The suit was filed by Churchgate to challenge the arbitrary action of Edo State Government in forcibly ejecting the company from the management of the Bendel Brewery on 17th, June 2003.

Churchgate, in a statement signed by its General Manager Ibikunle Adeogun stated that management of Bendel Breweries was ceded to the company via management agreement with Edo state government in 1992; consequently Churchgate reactivated the then moribund brewery, recalled its staff and resumed production activity.

However, Obajuwana was absent in court against an earlier order given by the court order that he should physically appear before the it, having been served with the criminal summons which he refused to honour.

According to Churchgate sources, the committal proceedings were based on refusal of the Edo State government to obey an order of interlocutory injunction restraining the state government from interfering with Churchgate Industries Limited in the management of Bendel Breweries in 2003; the order was also upheld by the Court of Appeal sitting in Benin in 2006.

In 2003 Justice Ibrahim Auta issued an injunction restraining the Edo State Government from interfering with Churchgate’s management of Bendel Brewery. The order was later upheld by the Benin Division of the Court of Appeal.