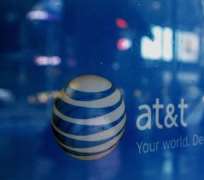 AT&T Inc (T.N) posted a $6.7 billion quarterly loss due to a hefty break-up fee for its failed T-Mobile USA merger and other charges on top of costly subsidies for smartphones such as Apple Inc's (AAPL.O) popular iPhone.

Its shares fell about 1 percent after the news. While the No. 2 U.S. wireless provider beat analysts' expectations for subscriber additions, the growth came at a cost as its wireless service margins plummeted. It also took a big non-cash pension-related charge on top of its $4 billion break-up package.

While advanced devices like iPhone can help subscriber numbers and revenue, they also shrink earnings as operators like AT&T and its bigger rival Verizon Wireless heavily subsidize the device to attract customers to two-year contracts.

AT&T's wireless service margin based on earnings before interest, tax, depreciation and amortization dropped to 28.7 percent from 43.7 percent in the third quarter and 37.6 percent a year earlier.

"If there's any reason to be upset, it certainly is the margins," said Stifel Nicolaus analyst Chris King, but he noted that strong smartphone sales should help AT&T in the long run.

The No. 2 U.S. mobile provider said it had added 717,000 subscribers in the quarter, beating the average expectation for 570,000 from seven analysts.

But AT&T's subscriber growth still lagged well behind Verizon Wireless whose parent Verizon Communications (VZ.N) reported on Tuesday that its wireless venture with Vodafone Group Plc (VOD.L) had added 1.2 million subscribers in the quarter. Verizon Wireless margins were also hurt by smartphone sales, but not as much as AT&T. [ID:nL2E8CO1WK]

Roe Equity Research analyst Kevin Roe said that only time will tell if the race to sign on smartphone customers will be worth the massive drag on margins.

"Its not getting easier. It will be tougher in 2012," he said. "The cost to capture and retain customers will increase as competition increases."

It forecast growth of about 2 percent for wireless average monthly revenue per user in 2012 and promised overall revenue growth without giving a specific target.

"They should at least do that. Hopefully they do better than 2 percent," said Roe.

Along with pushing advanced phones, operators are spending billions of dollars on upgrading their networks. Like AT&T and Verizon Wireless, smaller rival Sprint Nextel (S.N) is also upgrading its network for advanced services this year.

On top of this analysts see T-Mobile USA as a big competitive threat as it will be desperate to attract new subscribers growth since its AT&T deal failed.

Excluding the special charges, AT&T earned 42 cents per share, a penny below Wall Street expectations, according to Thomson Reuters I/B/E/S.

Revenue rose to $32.5 billion from $31.36 billion and compared with Wall Street expectations for $31.97 billion, according to Thomson Reuters I/B/E/S.

The company said it has set aside a budget of $20 billion for 2012 capital spending, similar to 2011 levels.

AT&T had to scrap its plans to buy Deutsche Telekom's (DTEGn.DE) T-Mobile USA in December after regulatory opposition.

Shares of AT&T fell about 1 percent to $29.85 in trading before the market opened.