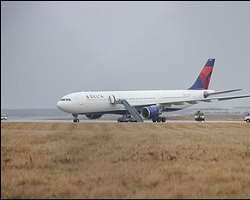 Abdul Mudallad, a Nigerian Muslim flying on board a Northwest airliner from Amsterdam to Detroit tried to ignite some kind of mystery powder and blow up the plane. He was tackled by some of his fellow passengers before the power could do whatever it was intended to do.

He has told investigators that he was acting on the behalf of Al-Qaeda.

Good thing there were some able bodied passengers on hand to give Abdul Mudallad the beating he richly deserved. It's not like the flight attendants could have done it. If there's one thing we learned on September 11, 2001, it was that flight attendants that weigh 105 lbs might be pretty to look at, but they are entirely unless when it comes to stopping a Saudi with a box cutter.

If it was up to me, I would have taken the billions of dollars TSA spent staffing pointless checkpoints and shoe inspectors and instead used it to pay former Army Rangers and other military types to be flight attendants. Not coffee. tea, or me type of flight attendants made popular in the 1950's and 60's, but flight attendants for the new century. Flight attendants that might not know how to make you a good Bloody Mary, but they would know how to kill you with a pencil.