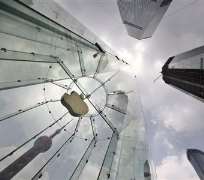 The world's most valuable technology corporation returned to form after a rare miss in the previous quarter, assuaging investors' worries that its sheer size meant it was headed into a period of slower growth.

It sold 37.04 million iPhones - its flagship product - and 15.43 million iPad tablets, doubling from a year earlier and easily outpacing already heightened expectations for a strong holiday season. That helped swell its warchest of cash and securities to almost $100 billion - more than enough to plug December's U.S. budget deficit and level with California's 2012/13 spending plan.

The company founded by late Silicon Valley titan Steve Jobs - who died in October after a years-long battle with cancer - smashed estimates on all its results including gross margin, which came in at 44.7 percent during the quarter.

Apple reported a net profit of $13.06 billion, or $13.87 a share, handily outstripping an average Street forecast of $10.16 per share. The beat alone - by more than $3 a share, or $3.5 billion - would be a respectable sales figure for many smaller tech companies.

"Going into 2012, I expect strength of iPhone, iPod Touch and iPad should carry on into the year. Apple still has some tailwind, including opening up new retail stores and expanding its distribution channels," said Hendi Susanto at Gabelli & Co.

"I would say Apple still has many unpenetrated international markets ... Apple is still far from its saturation.

The results allayed lingering doubts about the ability of new Chief Executive Tim Cook to lead the company that Jobs built from a garage project into a global leader. This was the first full quarter for Apple without its legendary cofounder.

But the big quarter fueled Wall Street's impatience with Apple's $97.6 billion in cash and short-term and long-term marketable securities. Several analysts zeroed in on that war chest during the conference, quizzing both Cook and Chief Financial Officer Peter Oppenheimer about Apple's plans for that immense cache.

Oppenheimer said it was "actively discussing" the cash balance but didn't have anything to announce. Neither Cook nor Oppenheimer offered clues as to what the company was thinking on a possible dividend or stock buyback - a constant on investors' most-wanted lists - but hinted that Apple may invest in its supply chain or in acquisitions.

"While one might be tempted to conclude they will go on a buying spree, we think that is likely not the case," said Michael Yoshikami, CEO of YCMNET Advisors, which owns Apple shares. "We are looking for Apple to pay a one-time distribution rather than an ongoing dividend."

Sales in the United States were particularly strong, with revenue rising 90 percent in the Americas region. Sales in Europe were up 55 percent even though the region is in the grip of a debt crisis that has pummeled consumer confidence.

MONSTER QUARTER
Shares in Apple jumped 8 percent to about $452 in extended trade following the earnings report. The stock - which set a record high of $427.75 just this month - had closed at $420.41 on the Nasdaq.

Several analysts had warned that Apple might face a rougher ride than usual in 2012.

Google Inc's Android - a free software to run smartphones, adopted heavily by Samsung Electronics, Motorola and others - is chipping away at Apple's market share. A host of tablets from Amazon.com Inc, among others, offers buyers viable alternatives.

And then there are the inherent difficulties in maintaining growth momentum. In fiscal 2011, Apple tacked on $43 billion to its revenue, which analysts likened to birthing a Fortune 500 from scratch - every year. Its market value stood just shy of $400 billion, rivaling Exxon Mobil for the title of largest U.S. corporation.

Still, some analysts said the stellar fiscal first quarter suggested such fears were premature, particularly given a 2012 pipeline that many expect to include the third iteration of the market-leading iPad and a fifth-generation iPhone that will trigger a new round of consumer mania.

"Customer demand was off the charts in the quarter," Oppenheimer told Reuters in an interview.

Average projections for sales of Apple products during the fiscal first quarter, which includes the holiday shopping season and one more week than is typical, were for roughly 31 million iPhones, 13.5 million to 14 million iPads and 5 million Mac computers.

"It sets up Apple well for the rest of the year," said Canaccord Genuity's Michael Walkley. "They are still ramping up the new geographies like the iPhone 4 in China, which they just started selling in January and we'll see in March results."

"IPhones and Siri (voice-activated software) still driving strong. An iPhone 5 for the end of the year with a new form factor and with LTE (next-generation mobile technology) will drive another set of gains in 2012," he added.