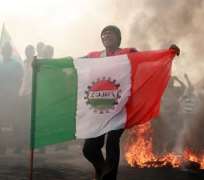 There is no doubt that the last unprompted mass revolt against President Goodluck Jonathan’s cold-blooded economic war on Nigeria’s middle- and working-class families was a damp squib, as the British call something that turns out to be a disappointment after good expectations.

Here was a splendidly promising, spontaneous, unscripted, and unexampled mass insurrection against an evil ruling class. Its promise—and initial success—filled us all with renewed faith and enthusiasm for our fatherland. For the first time in Nigeria’s history, a broad scope of Nigerians across our traditional primordial fissures of religion, region, ethnicity, etc. united in the face of a common threat from a greedy, unimaginative, and unconscionable elite that is dedicated to exterminating the masses of our people piecemeal. There is no parallel for that historic coalition of the oppressed in Nigeria.

Then Nigeria’s thoroughly compromised labor movement hijacked the revolt, lulled the people into a false sense of solidarity, and finally extinguished the revolutionary fire that was burning down the foundations of Nigeria’s ruling elite.

The Nigerian Labor Congress and the Trade Union Congress didn’t join the mass protests until at least three days after the fact. They were obviously drafted by President Jonathan and his agents to help contain, and if possible snuff out, the conflagration that was going to consume them.

From the very start, I privately expressed concerns that the Nigerian Labor Congress would infiltrate and dilute the people’s revolt. My friend, Auwal Musa Rafsanjani, who is president of the Civil Society Legislative Advocacy Center, thought I was being overly suspicious. He said he could vouch for the credibility of NLC president Abdulwaheed Omar. I wasn’t convinced. I told him his trust would be betrayed. I didn’t say that because I had oracular powers. I don’t. But I had a steadily escalating sense of premonition that the labor movement would commandeer and crush the spontaneous mass revolt from within. And they did.

The signs were evident for anyone with even the wispiest perceptual capacities to see. First, the current leaders of the NLC are unapologetic protégés of Adams Oshiomhole, the most cunningly duplicitous labor leader Nigeria has ever produced—but who for a long time enjoyed an unearned and undeserved reputation as a dogged and forthright defender of the Nigerian masses, a reputation he fraudulently exploited to become governor of Edo State.

Second, Adams Oshiomhole, NLC’s puppeteer, is an unapologetic advocate of petrol price hike—as he has always been, although he had done a great job of pretending to be for the people. It has now come to light that all the strikes he led against previous petrol price increases were all grand, elaborate, and carefully choreographed performances. Since NLC’s current leaders are his puppets, they couldn’t possibly perform anything independent of their controller.

Third, in the course of the mass revolt, a government document I saw showed that the NLC, in fact, had given its imprimatur to government’s plans to increase the pump price of petrol (which is now cleverly masked as “fuel subsidy removal”) many months back. So labor had been in cahoots with the government to fleece the masses all along. All their pretensions to the contrary were mere theater.

NLC and TUC leaders’ hijacking, neutralizing, and extinguishing of the people’s revolt reminds me of Malcolm X’s witty dramatization of how the popular revolt of black Americans against racism in the 1960s was contained by the government through “civil rights leaders.” These civil rights leaders weren’t originally part of the “March on Washington”

during which Dr. Martin Luther King gave his famous “I have a Dream”

speech.
Like the “Occupy Nigeria” movement, it was a spontaneous grassroots revolt that took the American black bourgeoisie by surprise. The government was scared to death that a “black steamroller was going to come down on the capital,” as Malcolm X memorably captured it.

Then the government quickly called the black civil rights leaders of the time and told them to stop it. "Boss, I can't stop it, because I didn't start it. I'm not even in it, much less the head of it," Malcolm said in an imaginary conversation he made up between the conniving black bourgeoisie and the John F. Kennedy administration. Malcolm said this during a December 10, 1963 speech he delivered in Detroit, Michigan, titled “Message to the Grassroots” .

When the black bourgeoisie said they were helpless before this black steamroller, Malcolm again made up a response that the government gave to the compromised black civil rights leaders: “I'll put you at the head of it. I'll endorse it. I'll welcome it. I'll help it. I'll join it.”

There are eerie analogues between the events Malcolm X brilliantly dramatized, some would say over-dramatized, in 1960s America and what happened in Nigeria last week. The “Occupy Nigeria” mass revolt took both the Jonathan government and the morally bankrupt labor aristocrats at the NLC and the TUC by surprise. When government told them to stop the revolt, they probably said, like the black bourgeoisie in 1960s America, they couldn’t stop what they didn’t start. So the government put them “at the head of it,” to use Malcolm’s words. It did this by choosing to “negotiate” with the labor, the same labor that was never a part of the revolt, that joined the revolt three days after it had started.

Soon enough, the masses of the people began to look up to NLC and TUC leaders as the “leaders” of the revolt. Then they “became” the revolt.

They took it over. As they took it over, they took control of its rhythm, form, compass, and denouement. And they are being rewarded for their skillful performance. I read that TUC president Peter Esele has been rewarded with membership into the Special Petroleum Industry Bill

(PIB) Task Force. That’s such a swift compensation for treachery!

But we shouldn’t despair. The leaderless, unstructured, spur-of-the-moment, if for now unsuccessful, mass upheaval that we saw in the past few days has restored many people’s optimism about Nigeria’s future in more ways than one. First, it has disproved the time-honored national myth that Nigerians can never unite over anything other than football.

Second, for the first time in Nigeria’s 51 years of existence, Muslims and Christians signed a covenant to live in peace in Kano, the hotbed of sanguinary religious convulsions. Pictures of Christians guarding Muslims while they prayed and of Muslims reciprocating the gesture by visiting churches and assuring Christians of protection and fraternal solidarity warmed my heart beyond measure.

Lastly, this battle isn’t over yet. The suicidal and clueless Nigerian elite are unlikely to relent in their cowardly and egomaniacal violation of the poor. When the combustion does erupt again, it would take a decidedly difference course. Labor leaders would no longer be able to stop what they didn’t start. A wise government would learn from this, retrace its steps, and respect the will and wishes of the people it claims to govern. But is any Nigerian government wise?

** Dr. Farooq A. Kperogi can be contacted at [email protected]