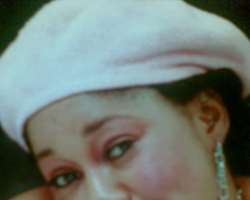 Tayo, according to the news went to see a friend, Tope Doherty who just returned from London for some important matters.
The two jolly friends, we were told, entered the red Honda CR-V with registration number FE 589 LND brought by Sikiratu Sidondo to cruise out only for some passersby to call their attention to a lifeless body of a 16 month-old allegedly said to have been caused by her while trying to reversed her car from the Close. The Police at the Awolowo Way, Ikeja based Traffic Division on notifying of the ugly incident swung into action and has since arrested and detained the highly controversial actress, whose romance with MC Oluomo hit the rocks a while ago, for manslaughter.

As you are reading this, Tayo Odueke, the UNILAG graduate has not been herself as she was said to have cried to state of unconsciousness with her eyes swollen up like someone who is infected with AIDS. However, the parents of the deceased, according to information, has written to the Police and even sworn to an affidavit that they would not further press charges on the actress since she didn't commit the act with intent. Meanwhile, effort is being made to get Tayo from the Police custody where she has been apprehended since last Friday.

If you can recall, the first version of this ugly scenario happened over four years ago when one of the screen goddesses, Ibinabo Fiberesima killed a male medical doctor identified as Suraju Giwa while driving carelessly and under the influence of alcohol along Lekki/Epe Expressway in Lagos. The Nollywood actress, Ibinabo Fiberesima was later convicted of murder/manslaughter and was sentenced to seven years imprisonment by the Igbosere division of the Lagos Magistrate Court before she was later bailed out.