BAYELSA GUBER: PDP, INEC AND THE POLICY OF DOUBLE STANDARDS 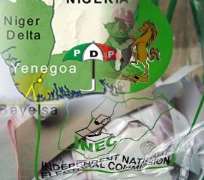 Two weeks ago, the Acting National Chairman of the Peoples Democratic Party (PDP) Abubakar Baraje expressed fury over the removal of the name of its party’s candidate Henry Dickson from the governorship elections scheduled for next month in Bayelsa State by the Independent National Electoral Commission (INEC). A week later, Dickson, the man in the political quagmire threw another verbal bomb at INEC with special reference to Kogi State’s recently held gubernatorial election which the PDP purportedly won but with many unresolved issues relating to PDP’s rightful candidate still pending in the courts of law.

According to Dickson, “In the case of Kogi where the winner of the first PDP primaries lost in the repeat primaries, didn’t they (INEC) recognise Capt. Wada? This is utter nonsense and I am so surprised over the illegal action taken by INEC."

The telling points in such a complex relationship are the simple facts that INEC excluded PDP's Dickson from Bayelsa gubernatorial election list for the reason: ‘subject to litigation’ whereas in Kogi State, actions of the court against Capt Wada of PDP were demonstratively ignored.

In the absence of a clear and intelligent explanation, what the leadership of the PDP wants the public to believe is that the actions of INEC in Kogi State are justified, but the actions in Bayelsa are blamed and considered inadmissible. In simple terms, it is obvious that there is no logical consistency on the part of INEC and its recent action in resting on the terminology: ‘subject to litigation’ to exclude the Bayelsa PDP candidate. As it has introduced a narrowing gap between Bayelsa and Kogi States political outlooks but the rules applied by INEC are different.

INEC’s growing silence on Bayelsa primaries may suggest that the PDP’s claims are not credible but this is least surprising especially given that the PDP is a political party famous for discriminatory or selective approach to issues. Realistically, the PDP may be known for a lot of things, but a firm and abiding commitment to rationality is not one of them. When faced with a choice between legality or party leadership impunity, it tends to go for leadership impunity. It is not surprising because my father told many years ago that, "dispensers of lawlessness are usually quick to engage in needless caterwauls and diversionary non sequiturs whenever their true record is exposed to public scrutiny" Instances abound but that is a story for another day.

On the part of INEC, one may ask where’s the difference in the Kogi and Bayelsa issue? The Kogi and Bayelsa issues are similar as they bother on restraining the Independent National Electoral Commission from receiving a new list of nominees since the names of Jibrin Isah Echocho and Sylva had been submitted by the party in an earlier conducted primaries and they are “not dead” as stipulated in section 33 of the Electoral Act. However, both INEC and PDP have made the issues complex, tense and historically loaded with political contradictions.

In Kogi, Alhaji Jibrin Isah Echocho did not contest the kangaroo primaries as alleged by Dickson even though he was allotted one vote. Jibrin Isah Echocho was in court for the same reason that Sylva went to court. Contrastingly, on Bayelsa primaries, INEC did not recognize Dickson because of the pending court case but on Kogi, INEC vacillated on Alhaji Jibrin Isah Echocho. To send a clear message, this is double standard and INEC has evidently shown in its conduct the application of different sets of principles for similar situations.

Ordinarily, If it is abuse when a man hits a woman, it should also be an abuse when a woman is doing the hitting, but it is usually not so. Indeed, in politics and business, nothing is impossible to explain, afterall the 18th century industrialist, Sam Gregg attempted with success to explain how Plato and Aristotle justified slavery.

These recent events and conflicts on PDP gubernatorial primaries not only highlights the need for re-examination of Kogi and Bayelsa election primaries but have brought up a fair amount of questions for both PDP and INEC. The most prominent fact about the Bayelsa and Kogi State PDP primaries is INEC’s vacillation as the issue of bias and absence of level playing field are obvious. The decision by INEC on Bayelsa gives us reasons to pause especially given the suspicion that the reverse decision on Kogi may not be caused by reasons far removed from undue influence.

It would be nice to be able to agree with INEC on Bayelsa given the legal connotation but INEC’s failure to take a similar action in Kogi is a further limitation of democracy in Nigeria. Certainly, with the recent development in Bayelsa, the observers of Kogi politics mostly supporters of Jibrin Isah Echocho will feel ill treated and may even conclude that INEC’s role in Kogi election was a clear attempt to stifle their rights. Without a doubt, INEC vacillation on Jibrin Isah Echocho is not only politically detrimental to Nigeria’s democracy but makes a mockery of our judicial system. Such an action if not corrected in the Kogi elections may breed grounds for chronic conflict and misinterpretation of the leadership quality of the Electoral Commission. However, with the contradictory position of INEC, the likely revisit of the Kogi election by the Judicial may not be an impossible hope.

In politics it is said that there are many things you cannot complain about. You just have to accept them and be smart enough to navigate them. However, the popular assumption is that what happened in Kogi and protest by PDP leadership on INEC’s decision on Bayelsa were endorsed by President Goodluck Jonathan, the National Party Leader of PDP brings in another complex dimension to the issues on ground. Luckily, these are mere conjectures but to suggest that a contestant is openly disliked by the establishment or is seen favourably by the President undermines the basic foundations of any genuine democracy.

While the INEC should keep in mind its constitutional power and limitations, the PDP should not be allowed to rewrite the constitution by stealth. Both INEC and PDP need to stop playing political theater. They should do what is right instead of taking the electorate for fools. It may be an uphill battle but it is good that the right things are done for the preservation and growth of Nigeria’s democracy. Any half baked solution like holding a closed door meeting on the Bayelsa issue between the PDP leadership and INEC Chairman as proffered by the PDP acting Chairman cannot advance our democracy. The Bayelsa and Kogi issues are closely related especially in this twisty political episode of Jibrin Isah Echocho and Governor Sylva. How they are resolved will determine the nature of democracy we practice under the leadership of President Goodkuck Jonathan.

Written by Phrank Shaibu, a Public Communications Consultant based in Abuja.