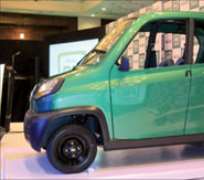 An India's flourishing auto manufacturer, Bajaj Auto, is working on a new autorickshaw, a four-wheeler, expected to hit the market in a couple of months.

Nigeria, where the company's first project, the three-wheeler, received high patronage, is one of the big markets being targetted with the new intra-city four-wheeler, the RE60.

This is coming after the Managing Director, Bajaj Auto, Mr. Rajiv Bajaj, revolutionised motorbike with the Pulsar.

Experts say Bajaj is trying to redefine his company with the novel RE60.

The three-wheeler was an instant success in India after its debut in 2001 and was later exported to other nations, especially the developing economies, including Nigeria.

In Nigeria, it came at when the business of commercial motorcycles was already receiving heavy criticism on the account of recklessness of its operators resulting fatal accidents.

In India, the local publication, Business Standard, reported on Tuesday of a handful of Bajaj employees on a misty cold morning in Delhi standing guard next to Bajaj Auto's new RE60 'four-wheeler' at the biennial Auto Expo, India's premier international auto exhibition.

Sporting the typical Bajaj white jersey and jackets, the middle-aged men have been with the company for decades, witnessing it transform from an iconic scooter maker to a performance bike producer, and are intrigued by the attention their company's newest invention is gathering.

'Our Pulsars have been market favourites for years and though we have not showcased any bikes this time around, see the excitement on the faces of these visitors', says one of the attendants gleefully.

He was talking about the RE60, Bajaj's production-ready, four-passenger car developed entirely in-house by India's number two bike maker after five years of development work including multiple strategy changes and several delays.

However, unlike the Tata Nano, the RE60's target customer, according to Bajaj, is the Indian auto rickshaw owner.

Almost all the specifications are about half as good as those delivered by the Tata Nano, which has a bigger engine and better top-end speed.

Like the Pulsar, which exploded onto the scene in 2001 and changed the image of Bajaj Auto, the RE60 is a similar gamble for the 'anti-car' company, as Bajaj likes his company to be referred to.

'This vehicle was born out of the costs and skills of a two-wheeler market. There must be a starting point for a strategy, which in our case was a brand,' Bajaj had said at the time of the vehicle's unveiling.

Bajaj is largely banking on the hope that the intra-city mode of transport in the near future will switch to the RE60 instead of the three-wheeler, where Bajaj Auto is the market leader for several years with its petrol and CNG-driven models.

This year, growth has been negative so far due to factors such as expensive loans, high inflation rates and steep increases in petrol costs. A majority of three-wheelers are bought on finance, unlike two-wheelers which are mostly purchased with cash.

In addition, some metros such as Mumbai have decided against granting new permits for more auto rickshaws in the city. Known for its high practicality attributes, three-wheelers have brought the transport solution for congested urban centres such as Mumbai.

Will the gamble work?
The big question is, will existing three-wheeler owners upgrade to the RE60?

Besides shelling out more to upgrade to a car, three-wheeler owners will have to procure new licenses suitable for a four-wheeler and train themselves accordingly as driving skills required for a car are different from that of a three-wheeler.

Other niggling issues such as extra parking space, larger turning radius and higher trip fares (the fare formula includes the cost of the vehicle too) also need to be looked into by transport authorities and regional transport offices before they allow sale of the RE60 as a commercial passenger vehicle. 'We can maneuver our auto rickshaw and take it through narrow lanes. This can never be possible with a car irrespective of its size. We do not know its price or its running and maintenance costs yet', said Shyam Sunder, an auto rickshaw driver in Mumbai.

Rather than relying just on autorickshaw drivers for sales of the RE60, Bajaj tried to further bolster its strategy for the vehicle. The Pune-based company was slated to supply the vehicle's platform to Renault-Nissan under a contract. The Franco-Japanese alliance had approached Bajaj Auto for forming a tripartite partnership in 2007 that would be an answer to Tata's Nano.

Terms of the informal partnership underwent various stages of changes and modification. A joint venture company was supposed to be formed after a memorandum of understanding was forged between the three companies.

However, due to contrasting views about the exact nature, characteristics and positioning of the vehicle, the partners dissolved the idea of forming the JV, with Renault and Nissan later deciding to be marketing partners for the car with Bajaj remaining the vehicle's sole manufacturer and developer.

Both the foreign companies are on the look out for a low-cost platform in India, which will allow them to penetrate the compact car segment presently controlled firmly by Maruti Suzuki and Hyundai Motors.

However, both companies are simultaneously working on three additional different compact car projects. While both car makers have officially declined to state whether they have decided to partner Bajaj Auto for the small car project or not, Andy Palmer, executive vice-president, Nissan Motor Company said, 'I know the concept of the (Bajaj) car. Whether or not it is an interesting model for a car remains to be seen.

'Nissan is extremely serious in the price entry segments. Some of the projects we are working on are riskier than others while some are harder. Some projects might fail while some may succeed. There is no commitment from either side.'

So why would Bajaj enter the four-wheeler transport segment not catered to by any company till date?

The answer perhaps lies with global marketing strategist Jack Trout, who was also the brain behind the idea of rebranding Bajaj Auto. Trout urged Bajaj to do more as it was the leader in the three-wheeler segment and usher in a new concept in urban transport.

Over the past few decades, conventional upgrades were carried out by Bajaj Auto on its three-wheeler range including an upgrade to four-stroke engine from a two-stroke. However, the RE60 would be considered as the most dramatic change as this would be the first time in many decades a car would be positioned as a taxi and not a personal mobility vehicle.

'When everyone is focused on either motorcycles or cars, Bajaj has thought differently with the RE60 by positioning it as a taxi. The small car segment is crowded and Bajaj doesn't have the brand name to market the vehicle against names like Tata Motors and Maruti Suzuki,' said a senior executive of a three-wheeler making firm.

Trout's advice resonates when you look at Bajaj's strategy for its core segment which is two-wheelers. After quitting the scooter segment where for multiple generations it retailed the iconic Chetak branded geared scooter, Bajaj Auto shifted to premium biking with the launch of the Pulsar motorcycle in 2001.