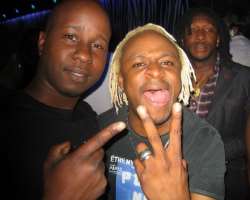 Afrocentric Hip hop Star, Tony Tetula is said to be facing hard time in Europe at the mercy of his friends who have been taking care of his daily needs. It was gathered his travails started when two of his shows in U.K failed woefully due to the poor turnout of audience at the venues.

The source further stated to www.nollywoodgists.com that the Oyo State born artiste wanted to use the opportunity to launch his last album titled, “Made in Heaven” released on his private music label. Following flop of the party. Some of his friends, Ruggedman and other artistes who flew with him to London for the concerts have to come back to Nigeria without him.

It was gathered that before Tony traveled to Europe for the show, he was owing some studio engineers to the tune of N2.5m which he was battling to pay.

Tony Tetula's video promo on youtube before the flop concert