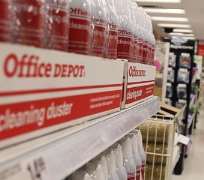 The news comes just days after eBay Inc's PayPal unit said it had started testing in-store payments in 51 Home Depot stores, as the online payments provider moves to expand into the physical world of brick and mortar.

PayPal has talked about its plans to offer the service at 20 major retailers by the end of the year, but not named other chains participating in the initiative.

"It's at this point in a small number of stores ... because there are still some rough spots in that experience. There are some limitations on who can use it, service carriers that support that," said Kevin Peters, president of Office Depot's North American unit. PayPal declined comment on Saturday.

PayPal's "wallet in the cloud" initiative lets shoppers who have a PayPal account pay by simply typing their mobile numbers and PINs at checkout counters. They can also pay by swiping a PayPal card and entering a PIN.

Office Depot's Peters said he was eager to experiment with anything that would help faster checkout in stores, but that the chain would take its time before rolling out the initiative to more stores.

"At this point, we are walking very, very slowly. The last thing we want to do is to roll out technology that doesn't appreciably change the customer experience," Peters said.

Home Depot is much more optimistic about the PayPal test.

"We believe PayPal's solution has the potential to improve the checkout experience as we know it today by making it fast, secure and more convenient for the customer while providing savings for Home Depot," said Dwaine Kimmet, Home Depot's treasurer and vice president of financial services.

"We intend to stay at the forefront of POS technologies like PayPal's in-store checkout using an empty hand interface," Kimmet said, adding that PayPal point-of-sale systems would help improve the checkout and customer service experience "all at a lower transaction cost than traditional payment networks."

PayPal is a dominant player in online payments, with over 100 million users. But the business is trying to expand into offline payments, a much larger market, pitting the eBay unit against payments giants, including Visa Inc, MasterCard Inc and American Express Co.

In September, PayPal pitched its new in-store payments system to about 120 retailers, including Sports Authority, at an event in Los Angeles. EBay CEO John Donahoe spoke about the initiative several times last year, but the company had not disclosed which retailers agreed to test it first.

Donahoe told analysts on Wednesday the in-store point-of-sale trial was being rolled out at 51 Home Depot stores this week, mainly in California's Bay Area.

During a conference call after eBay results, Donahoe said he bought a hammer and tape measure from a Home Depot in San Jose, California, without his wallet or cell phone. At checkout, the CEO pressed a "Pay with PayPal" option on the terminal, put in his mobile number and a PIN and "boom, I was done."

In an interview with Reuters, Donahoe compared the point-of-sale, or POS, initiative to the early days of PayPal's Merchant Services business. PayPal used to be used almost entirely on eBay's main online marketplace. But about seven years ago, the service began to expand on other websites.

That off-eBay business grew to annual payment volume of more than $70 billion in seven years, according to Donahoe.

"If we get just 2 percent share of checkout at point-of-sale locations, that's another $70 billion business," Donahoe said. "That's the opportunity."