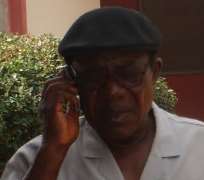 More Stories on This Section
For many years, ace actor, Mr. James Iroha, aka Giringory Akabuogu, held Nigerians spellbound with his acting prowess, especially owing to the comical bent in his performance. He was a regular on the popular television soap, Masquerade, on national television, the Nigerian Television Authority (NTA).

Today, Iroha, who is 70, is a shadow of himself. He's old, sick, poor, blind and dying gradually. He told Saturday Sun the story of his life, in his hometown, Amaokwe Item, in Item, Bende Local Government Area, Abia State.

You made a mark in acting. How would you say your life in acting came about?
I would tell you about my family. My mother was not educated; neither was my father. God brought them together theatrically. My mother happened to be the funniest woman I ever met in my whole life. If she failed to come out at any major festival day, like Mbom festival in Item community the people would wait until she appeared. It was only when she arrived at the scene that the mood as well as the pace for the ceremony would be set. She was funny beyond comparison. No child ever cried in my compound. She always had a mask and carried a small knife with which she threatened children and made them submissive, whenever they tried to disturb their parents.

Every one knew Oyidia Ugorji and she enjoyed herself thoroughly. At a certain stage, when I left primary school and went through secondary school and university, I realised that my parents were running a theatre at home. They didn't know they had a theatre. But it had no form, no pattern; like when God created this world it had no form; so He kept remolding and nailing until he got it right and there was light. That light in the family happened to be me.

What were your school days like?
We were living in Bukuru, Plateau State then. Every child in that sub-station staff quarters owned by the National Electric Supply Company (NESCO) was going to school, except me. So, parents of those children met one day and decided to ask my elder brother why he did not send me to school. He could not answer and they agreed to raise money for me to go to night school. While other children went in the day, I went in the night. I used to collect some ink from them and smear on my shirt to look like a day student. After primary school, the head teacher of St Peter's College, Bukuru noticed me and came home to ask my brother why I had not been sent to higher school. He said he was 'prepared to help. At the end of the talk, the man decided to accept me in the school, free. That was the first scholarship I had. Eventually, I went to the University of Ibadan and majored in Theatre Arts, in 1966. I was the best graduating student, pre-war of the university.

Tell us about Masquerade cast…
At the end of the civil war in Nigeria, I looked at the faces of easterners everywhere I went and I could see long faces, telling sad stories of the just-concluded hostilities. These faces could not be brightened by mere thinking, or even eating because they must have lost their loved ones, property and homes. Then I thought there could be something to do to lift their spirits. I thought about my final year project, which established that Africans readily accept humour and decided to do what I called 'enteredutainment.' That is to say through entertainment, we could inject education, while the people enjoyed themselves; we could import some serious information about life.
So I said to myself, let me see what I could do, so that when people watch or listen to the drama, they would be relieved of the burden on their faces and instead radiate love and happiness. So, I started what I called the adventures of Chief Zebrudaya Okoroigwe Nwogbo, alias 4.30. My father gave me the impression that he was not speaking the ordinary Igbo; he spoke Arochukwu Igbo. When he spoke English, some of the words could not be found in the dictionary, although he could communicate with you, his own way. His method is called malapropism. The late George Bernard Shaw wrote about it as the ability to communicate in English without being right. But he still could communicate. That was exactly what my father did without knowing it.

Why did you choose to project Chief Zebrudaya instead of Giringory?
No one else impressed me in that role more than him. I looked at the Efiks and Ibibios and they were assiduous; so I chose Giringory and Clarus to play those roles. There was nothing Clarus did not do to bend Giringory, by telling lies. Between him and Clarus, that was the real opposite. He told all the lies he liked, but Giringory told all the truth. Put it together, you would get what you wanted. Just like my mother, who played the role of homebuilder sort of, my father played the bring-down-the-roof type of role.

Was your role as Chief Zebrudaya's servant due to your background?
No. It takes the wisdom in the whole world to be successfully foolish. If you want to be stupid you need to pray to God for wisdom to be foolish enough; otherwise you can't make it.

How long did you stay on the set?
I was 24 years old when I began acting, but today I'm 70. I started acting as amateur before going to the university; so as a professional, I spent over 40 years on the set. I'm still acting at home and abroad.

What's your take on artistes' welfare in Nigeria today?
Government, ab initio, was projecting us and said we ought to have been paying them. According to them that they gave us a medium to express ourselves was good enough; so they were even asking us to pay. They were paying us N250 per episode of the Masquerade. Some of us got N2; others received N10 only, and even at that we kept praying and hoping that we would appear the next week. So unlike now, we were not paid any professional fees. A time came when I thought the government discovered that they had skeletons in their cupboard. They thought, perhaps, we were going places and at the end of the day we may end up destroying them, exposing them too much in Masquerade. That's why they supported our being yanked off the air. That was how we were rested. I'm sure Nigerians still want the programme, even till tomorrow. If we start it again, it would still be as wholesome and entertaining as it was in the beginning. Even in Nollywood, we have seen all sorts of video productions, but we have not seen anything better than the Masquerade.

You were honoured with the Officer of the Order of the Niger (OON). How did this come about?
I was not expecting the award. I was surprised when they gave me a form to fill in my office at Owerri. They said I had been picked to receive the national award. I said, ok. I didn't believe it was my own James, until I saw James Akwari Iroha on the form. I didn't even know how they got my full names. However, I filled the forms and returned them to the governor of Imo state, the late Chief Sam Mbakwe, who forwarded them to Lagos. This was during the time Alhaji Shehu Shagari was Nigeria's president. When they were reading my citation I was shocked because I didn't believe it was I. Later somebody told me he interviewed a lady who taught me in my primary school and the teacher gave a good report about me.

We understand you have been ill. Has government done anything to help you?
Nothing as yet, but some of my professional colleagues came when my wife died. That was good enough. Chief Zebrudaya was here, and Ovularia too. A couple of my friends came visiting also. That was very encouraging.

Do you have any regrets?
I don't have any regrets because if I say I have some regrets, just because of personal challenges, that would be wrong. I entertained the public and they are still showing appreciation. Whenever I need money I go to the bank and say to the manager, I'm broke, I don't have any money. He would say how much do you need, and I would bring out my ledger and he would say write your cheque; that's all. I would collect some money and go home. If I were sick and go to the hospital, the doctor would see me and whatever emergencies he has, he would drop them and find the drugs, even when the drugs are out of stock. I have a lot of goodwill; that's why I said I have no regrets, because that is what is keeping me alive. Masquerade gave a lot of people the impression that it is a subtle vehicle for serious information. For the fact that government doesn't want the programme, the much we have done so far is good enough.

What message do you have for young actors?
Let them not give up. Let the budding artistes continue to entertain the public. It is a good role and highly satisfying. Let them continue nursing the hope.

What do you think of Nollywood?
They have done well so far. But I believe there is still room for improvement. There was a time I was invited by the LNG in Lagos, as a special guest of honour. They asked me about Nollywood and I said Nollywood had changed the face of entertainment in the country; but there is room for development; there are some loose nuts that must be tightened. If you watch some of their productions, they keep saying people below 16 or 18 years cannot watch these films or videos, and as the production comes up you would see something contrary. What I don't like is why should the producer say the film is not for under 16, yet in the actual production you see people below 16 in the film? How do you reconcile that? The solution is for them to create children's time belt and films, so that the children would know the time belt to watch their film and go to sleep, while adults can stay on their own belt and watch their production. They are not doing that. Adults should perform for children, not leaving children to produce their own films.

Tell one about your failing health..
I have been to various doctors and wherever people suggested. My friends keep suggesting here and there and I went to all those places, even to India. Now there is nothing between poverty and me. I'm just nose-to-nose with poverty. If I mention the amount of money I spent in India, it's unbelievable. I was almost stranded in India, living in a bed and breakfast hotel for 16 days. When I came back here, I was almost useless. I'm a pensioner and my pension is not regular. Government sometimes does not have money to pay us our pension. In that situation, they pay their regular staff before thinking of pensioners. We are dead woods.

If you receive large sum of money what would you do with it?
Personal rehabilitation. The first thing I will do is personal rehabilitation, and then pay my rent. I don't have a house of my own. I still pay landlord rent even in this twilight time of my life.I am almost begging for food; so I need money to pay my rent, buy my medicines and maybe repair my car, which has been there for two years, untouched. So, if I get some money, I think I would be happy and better off psychologically, I may be healed too.