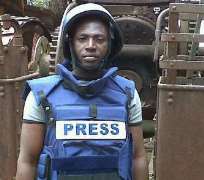 Reports reaching NigeriaFilms.Com say that the Kano multiple explosion today has claimed the live of a reporter with Channels TV.

Enenche Okogwu was killed today in Kano while on duty filming the bomb attack at the Farm Centre Police Station in the accient city of Kano, in Northern Nigeria.

There were reports of explosions which some said were over 20 accross the once peaceful city of Kano. No group has come out to claim responsibility for the multiple attacks for now. Some have speculated that the dreaded Boko Haram Islamic group might be responsible for the attacks.