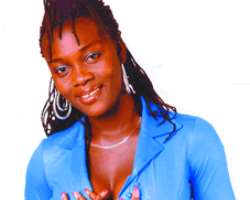 The fire of Nollywood is fast spreading to other parts of the country. From Lagos to Enugu, down to Asaba and Benin City, the movie industry is one to reckon with.

Among the many faces emerging from the Heartbeat of the Nation is pretty and talented Helen Uleburin Irerua.
This up-and-coming actress, who studied Business Education and Accounting at the College of Education, Ekiadolor, Benin, is fast making a statement for herself in interpreting characters in movies, which has earned her a place in the heart of movie producers jostling to feature her in their flicks.

The dark-skinned beauty from Owan East Local Government Area of Edo State and model for Modeller and other modelling outfits revealed that acting is innate in her. She said: “I love acting and I was told I could act. Whenever I watched movies, I always felt I could act too. I joined the drama club then in school, thereafter I came to town and joined Actors Guild of Nigeria and Edo State Artistes Forum, which is more involved in stage productions.”

Irerua has featured in both stage and movies including Campus Meeting, Kingdom Tout, Prejudice, Life is Wicked, Ikoka and the Trials of Ekuase and many other soaps and films that are yet to be released.

With deep powerful voice, the compere and teacher has the like of Stephanie Okereke, Genevieve Nnaji, Joke Silva and Mercy Johnson as role models even as she hopes to win AMAA award in the nearest future which will propel her to win international awards.

Multi-talented Irerua has this to say about Nollywod: “The Nigerian movie industry is growing faster than expected and I urge that the industry be supported instead of criticizing it. Actors and actresses in Edo State are also outstanding. They are wonderful. In fact, we have a lot of talented actors in Benin. It is just like producers don't visit Benin regularly for auditions but I know that one day, we shall reach that enviable height. I also want to encourage indigenes to sponsor film productions here.”

Irerua, however, hinted that God, colleagues and her parents who have been a pillar of support inspire her.