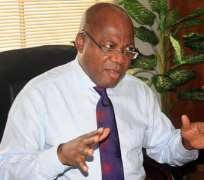 Agbakoba, who made the submission before the House of Representatives ad hoc committee on subsidy management maintained that for the rot in the oil sector to be unravelled, the federal government must ensure full implementation of the KPMG report.

He said if the recommendations of the KPMG audit report are judiciously implemented, the country would generate about N5 trillion while the implementation of the oil and gas content law is capable of yielding N10 trillion annually.

The Senior Advocate of Nigeria (SAN), said the KPMG audit report, which has exposed ‘embarrassing sharp practices’ in the nation’s foremost petroleum corporation has the antidote to revealing the “thieving elements” in the oil sector.

According to him, ‘the KPMG report is so embarrassing and a big disgrace. A substantial part of the work of this committee had been done by the KPMG and it is very unfortunate that ever since that audit was done, nothing was done with the report. The KPMG report should be fully implemented”.

Agbakoba said that those behind the mismanagement of the subsidy regime should be prosecuted to serve as a deterrent to others, while advising the federal government to further empower the Economic and Financial Crime Commission (EFCC) to effectively carry out its functions.

He called on government to diversify the country’s revenue sources and stop over reliance on oil and gas.

Agbakoba said that due to the non-implementation of the Oil and Gas Local Content Act, the International Oil Companies were cheating Nigeria and making her to lose high volume of revenue.

“Let us go away from the practice of mere policy statement. This is the time to act by ensuring that pour laws work” He said.

Urging the immediate passage of the PIB, Agbakoba said that full deregulation of the downstream sector would facilitate the commercialisation of the Nigeria National Petroleum Corporation (NNPC) which would in turn eliminate all levels of corruption in the oil sector.

The former NBA President further sought the restructuring of the country to make way for some kinds of decentralization of governance.

Speaking on the removal of subsidy on PMS, the former NBA boss noted that it could be argued that subsidy does not exist due to the manner it is being administered. Sounding rhetorical, he said “In the court of law for instance, the crucial issue would have been if there was indeed a subsidy, and if there is, where is the evidence?”

He also argued that, while deregulation is a global economic phenomenon, implementing the policy in isolation without taking care of other basic salient but very relevant issues in the system would be an effort in futility.

The lawyer expressed disappointment that the Nigerian government has the practice of not patronising indigenous businessmen and professionals but is obsessed with patronising multinational companies that use our money to develop their economies whereas the nation’s economy keeps receding.


“If we want to change our country, let us implement our laws. The economy will not grow by budgeting so much money. It will grow by government empowering our people. Why does our government still bank in foreign banks? Is anything wrong with our banks? Government has to promote Nigerian businesses. We have to love ourselves first”.

“Mobil Oil Ltd is still importing foreign lawyers to write simple agreements. They still bring in foreign engineers while our people are here without jobs. Can you go to the United States or Britain and do that. Of course they will not allow you to do that”.

The legal luminary implored the lawmakers to pass a law that would protect Nigerians by giving them preferential treatment in business transactions with Nigerian government over their foreign competitors doing business on our soil.

He also urged the Federal Government to implement the Cabotage Act, which has been put in abeyance since its passage by the National Assembly and assented to by former President Olusegun Obasanjo, pointing out that when implemented, the law would transform the maritime sector and make it contribute substantial revenue to the economy.