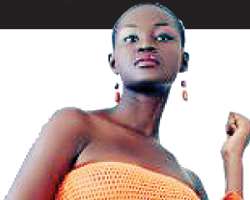 Cynthia Omorodion was the winner of the 2008 edition of Nigeria Next Super Model, a model search competition organised by Isis Models, a fashion outfit owned by Joan Okorodudu. But in this interview with ADA ONYEMA, she laments that none of the promises made by Isis Models was fulfilled. How did you start your modelling career?

First and foremost, I never intended to be a model. It all started a few years ago while I was in secondary school. We were watching Video Fashion with my grandmother and friends. As we watched, someone said that a particular girl in the fashion show looked like me. I went back to school the following day and started telling my friends that I was Miss Nigeria, doing catwalk and all that. A particular guy in the class told me that I could become one because I am tall and I have the physique. Then, I didn't know anything about modelling. When I got to University of Benin, people started asking if I was a model, but I told them I was not. They asked if they could give me contracts in Lagos and elsewhere. I started modelling professionally in 2006. That was when a friend of mine called me for the ThisDay fashion show. I went and came second. I must say that Dakova actually gave me a chance. That was when they did This Day Fashion Show in Lagos in 2006. Then, there was nothing like that in Benin. One had to come down to Lagos. I was pursuing a diploma in Law then, but I said let me drop it and go for modelling and see what that will earn me. Here I am today.

Did anybody in your family kick against that decision?

My mum did. She said that if I modelled, I would be half-naked on the runway. I had to make her to understand that modelling was what I wanted to do. I had to hide it from my Dad because he was a very strict lawyer. If I had told him that I wanted to be a model and not a lawyer, he would have buried me alive. But he is late now. I had to lose one year when my father died in 2007. Now I am modelling and I am sure he is happy wherever he is because I have not messed up his name.

Why did you lose one year after your father's death? Was it for lack of funds?

I didn't drop out of school. I have a diploma. I was supposed to go in through Direct entry, but I stopped.

What made you to stop?

I stopped because of modelling. That was a very foolish thing to do.

How did you come in contact with Joan Okorodudu?

After my dad's death, I came to Lagos. A friend of mine called me and told me that there was a show going on and they needed some models. When I came, I had to stay with another friend of mine to see what was happening. While going through City People magazine, I stumbled on the advert of the Nigeria Next Super Model competition. The winner was to get a Kia Picanto and 10,000 dollars contract. The first and second runners up were to get contracts too. What a fantastic offer! I logged on to the Internet and saw everything there. I was told that I had to download the form from the Internet. I was also told I had to come back for the audition. I was excited when I went for the audition and I was picked. The second time, I was not picked and I felt sad. Last year, my manager asked me that I should try and go for the auditioning of Nigeria Next Super Model, I went for the auditioning and we were camped. In September, I was declared winner and I felt very happy. It was something I was really happy about.

What was it like being a winner of Nigeria's Next Super Model?

It brought a lot of publicity. In short, it added spice to my modelling career in Nigeria and South Africa. It was a mixed feeling though.

Share with us some of your positive experiences while in South Africa?

I went to South Africa, did some auditions and shows and we came back to Nigeria.

How about the negative side of it?

Like I always say, you don't expect life to be a bed of roses. There are two sides to a coin. I wasn't happy. At the end of the day, it wasn't what I expected it to be. At the same time, experience is the best teacher.

Do you know Marcia Okhai?

Yes, she is my friend and the first runner up of the Nigeria Next Super Model last year.

How come you quarrelled in South Africa?

It is a long story. But at the end of the day, we settled the problem. When I got there, I told her there was no reason to fight over nothing. There was nothing we were competing for. It was just that we were trying to get into the camp. We are out of it. There is no need for us to be quarrelling and nursing bad feelings against each other. We tried to settle our differences and we are cool.

Is it true that Joan Okorodudu, the CEO of Isis Model, seized your passport on arrival in South Africa?

When your dreams did not materialis in South Africa, what did you do?

I was a bit down and I felt sad. But now, I have gone past it.

Who sponsored your trip to South Africa?

But you were the winner…

He was a personal manager and at other times I paid my bills..

Were you not supposed to be sponsored by Isis Modelling Agency?

When it did not sponsor you, what did you do?

I didn't do anything.

Did you get your prize as the winner last year?

You mean the 10,000 dollars contract, a Kia Rio and a trip to Germany to represent Nigeria at the top model of the world event?

You mean you did not get any of these?

What were you doing in South Africa then?

Was that a part of the contract?

I think so, because in the brochure, there is a place where it is written that the winner will get a 3-year contract with Isis Models.

You mean the other parts of the contract were not fulfilled?

Were you supposed to be paid while modelling under Isis?

Sure! When you work you get paid.

So were you paid?

We did a few fashion shows but they paid our agency.

Did the agency pay you?

Does that mean you will let it go like that?

In law, there is what we call invitation to treat. It means that there could be an offer but at the end of the day it might not be fulfilled. But after it was circulated in the Nigerian newspapers, on the Internet and everywhere, my lawyer said it was no longer an invitation to treat because I have printed evidence where it was circulated that I drove home a Kia Rio and got 10 000 dollars worth of contract. I think it is something that I can really enforce in the courts and get justice at the end of the day. So, that is what I'm doing now.

You want to sue her?

Yes, we have served her notice already.

Why were you not there to crown the current winner?

I wasn't invited in any form. I wasn't called. Normally, as the winner, I was supposed to be called to come to the camp and meet the models, take photographs, but none of these happened. It's cool. It is not really a big deal so long I get legal redress.

How would you describe your experience in South Africa as the winner of Nigeria's Next Super Model?

Sincerely speaking, I wish I never travelled that road. It brought so much pain and tears. But it's okay. I'm much more matured now. It was a waste. There is no reason to cry.

What is your advice to other models?

Before you get into any modelling competition, you need to get a lawyer. In the US, even a 15-year-old model would lawyer. When you are signing a contract, you need to get a copy so that somebody will not just come from nowhere and start discussing another thing. You need to do it in a legal way. I will advise every model that whatever they are doing, they should always get a lawyer. Even if you are promised N50 million for a show, ensure that you get a lawyer. Don't be carried away by stuffs you think are gold. I tell you, so many of them are not.

Were you hurt by all this?

I was very hurt.

Did you find out why your car was not given to you?

First, I was told that Lagos State Government bought all the Kia Rios in Nigeria. Later I heard that the man in charge had travelled to India for holiday. Again. I was told that Kia did not live up to their promise. I got bored with all those stories. I just couldn't take so many things anymore.

Were you under any oath that it took you this long to open up?

No. But they kept tossing me around, making me believe their lies. But I have decided to seek redress in the law court.