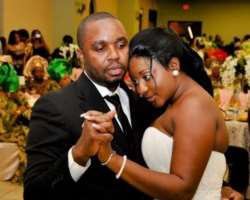 Ini and Hubby
Listen to article

Movie stars as well as musicians took turns to celebrate the year by getting married.

The celebration began early in the year with the superlative wedding of controversial actress, Iniobong Edo-Ehiagwina, who had kept her colleagues and movie buffs in suspense. In Eket, Akwa Ibom State, the Theatre Arts graduate of the University of Calabar, exchanged marital vows with her heartthrob, Phillip Ehiagwina, with a few of her colleagues in attendance. The ceremony later continued in the United States, with some of their friends and associates, gracing the most talked about wedding of the year by Nollywood practitioners.

Similarly, another cross over actress, Ronke Ojo-Macaulay a.k.a. Ronke Oshodi Oke, proved her critics wrong, when she finally staged a society wedding with her auto dealer-hubby early this year. The talk-of-the-town wedding, particularly among her colleagues in the Association of Nigerian Theatre Arts Practitioners (ANTP), has no doubt erased the name of the naturally endowed actress from the black list of eligible spinsters in the movie industry. Other entertainers who towed that path this year, include Olaitan Hughes a.k.a. Sokleva of the Rooftop MCs fame and Oluwasegun Osaniyi a.k.a. Lord of Ajasa, while versatile singer, Olanrewaju Fasasi a.k.a. Sound Sultan on Thursday, 1 October, married Chichi, his long-time lover in Okokomaiko area of Lagos.

Maverick actor, Ernest Asuzu, who was taken to the Psychiatric Hospital, Yaba, Lagos, after destroying transmission equipment worth millions of naira belonging to Murhi International Television (MITV), shocked many recently, when he got married in Bayelsa State. However, the marriage would not have surprised many people as that of star actress, Stella Damasus-Nzeribe (formerly Aboderin), who married for the second time. The screen diva and widow of the late Jayejeje Aboderin, secretly got married with Emeka Nzeribe in her home town in the Eastern part of the country.

Reports also have it that Mallam Ibrahim Sokoto a.k.a. MC Kirikiri, is now married.

Bold Faces presenter, Tricia Eseigbe, will marry tomorrow and Yinka Best, a popular juju musician and saxophonist, will be joined together with his wife at the Celestial Church of Christ, Afonifoji Ibukun Parish, Lagos, tomorrow.

While some entertainers are still rejoicing over their recently contracted unions, two Nollywood actresses, Monalisa Chinda and Ayo Adesanya, had problems with their marriages this year. The unions with Dejo Richards and Goriola Hassan respectively, broke up on allegations of infidelity.

Unlike previous years, death plagued the entertainment industry this year. It all began in March, with the death of Iyabo Momoh, former Mama Ajasco of the Papa Ajasco & Company fame. Then came that of the blind minstrel, Kokoro and energetic female fuji artiste, Iyabo Osanle. The home of sweet-voiced R&B singer, Olalekan Fadeyi a.k.a. Azadus, also had its share of bad taste, when he lost his two-year old son barely 10 days to his birthday.

A veteran actor and last of the defunct Village Headmaster series, Leke Ajao a.k.a. Kokonsari, died in his Osogbo residence, after a brief illness, while Bisi, the actress wife of the doyen of Nigerian theatre, the late Chief Hubert Ogunde, died on set at a film location in Idiroko area of Ogun State.

In the United States of America, death also knocked down another top Nollywood actress and widow of the late Basorun MKO Abiola, Oluwaremilekun. She died in a New York hospital while receiving treatment on protracted cancer. Few days to the incident, Iya Alakara, actress wife of a pioneer theatre arts practitioner, the late Ishola Ogunsola a.k.a. I-sho Pepper, died in Ibadan.

On Tuesday, 1 September, there was another 'black out' in Nollywood, as Alhaja Monsurat Omidina a.k.a. Omoladun Kenkelewu, died in her Ikorodu residence, just as Steve Kadiri, a top entertainment presenter on radio, finally lost the battle to kidney failure in October.

Few artistes escaped death by the whiskers in auto crashes recorded in the outgoing year. Few weeks after the death of his wife, popular Yoruba comedian, Babatunde Omidina a.k.a. Baba Suwe, was involved in a ghastly accident with a colleague, Yomi Fabiyi and his younger brother, Gboyega Omidina.

On Sunday, 13 December, Femi Branch was also involved in an accident along Osogbo-Ibadan link road, while returning from a function.

R&B singer, Paul Play Dairo, had in the outgoing year, visited South Africa to seek medical attention on a kidney disease. It was gathered that he was subjected to the surgeon's knife before returning to Nigeria, just as fuji music czar, Wasiu Omogbolahan Anifowose a.k.a. K1, was also reported to have undergone a surgery for collapsed lung ailment in Canada, before returning home yesterday.

A Nollywood actress, Caroline Johnson, who is currently battling with cancer of the blood, is said to have also had a surgery abroad.