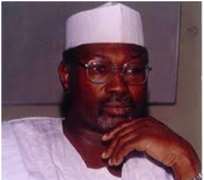 Following the high rate of insecurity in parts of Northern Nigeria, especially in Adamawa and Kaduna states, the Independent National Electoral Commission (INEC) has put off elections in the two states.

In a statement issued by Chairman of INEC, Professor Attahiru M. Jega, and made available to huhuonline.com , the nation's electoral body said that the Commission vowed not hold elections under an atmosphere of insecurity.

'Due to the prevailing situations in Adamawa and Kaduna States, the Independent National Electoral Commission (INEC) has, by the powers conferred on it in Section 26 (i) of the Electoral Act 2010, as amended, postponed the scheduled elections in the two states.

'These elections are the gubernatorial election in Adamawa State and the bye-election into Soba Federal Constituency of Kaduna State. The two elections will now hold on the 4th February, 2012.

'The decision to postpone these elections was arrived at after due consultations with relevant stakeholders.

'The Commission does not wish to hold any election under an atmosphere of insecurity, emergency or curfew. Therefore it calls on all stakeholders to conduct themselves in a manner that will ensure peaceful and violence-free atmosphere for the elections.

'INEC hereby restates its determination to conduct, free, fair and credible elections in these two states and urges all and sundry to join hands with it in achieving this noble cause.

'The Commission also calls on security agencies to ensure a conducive environment for the smooth conduct of these elections', the statement concluded.