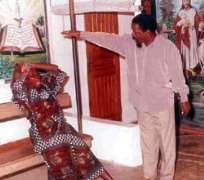 …Claims former Pastor
Last week, the paper published an interview Pastor Godswill Agomoh Paul had with Nigeria magazine-Life Way, where he accused the General Overseer of the Synagogue Church of All Nations, Prophet T.B. Joshua of stage-managing many of the so-called miracles he has been performing; he also accused the Prophet of using him (Godswill Agomoh) to carry out many of his nefarious activities.

In today's edition, Pastor Godswill Agomoh Paul reveals how some mysterious deaths were recorded at the Synagogue, when he was one of the junior prophets of the Ministry.

Pastor Godswill Agomoh Paul, Pastor who claimed that miracles being performed at the Synagogue Church were faked also revealed in his interview with the LifeWay magazine that he witnessed many mysterious deaths during his tenure as the second-in-command to Prophet T.B. Joshua, the General Overseer of the Synagogue.

…“There are several cases of mysterious deaths which I witnessed. There was the case of a lady, one of the in-house tailors sewing the furniture fabrics. She came out of the bathroom one day, collapsed and died”, he narrated, adding “Unknown to us all she had a friend among the tailors who quickly placed a call to her family to inform them she has collapsed and died. The girl's body was mysteriously dumped in front of a hotel at Egbe. The church officially informed the father that his daughter's body was found in front of the hotel; she was dead and they had deposited her in a mortuary”.

Pastor Godswill Agomoh Paul continued: “Naturally the man cried foul. Joshua called us together to strategise. We looked into the archives and found the tape when the girl alleged that her father raped her when she was young. And the father later came to confirm the story”.

According to him “Joshua briefed us to get all the Igbo community together and show them the video after a Sunday service. He told me to tell them how he saved the girl by bringing her in. By the time I finished briefing the Igbo community and showing the confession video, they were very angry with the girl's father. The father had no choice but to prostrate and beg Joshua and everybody. That was the end of the matter”.

“He further narrated: There was also the case of a carpenter from Arigidi, near Joshua's home town in Ondo State. While they were roofing the new sites he fell directly on the altar. The altar is built like a pond, dug and fitted with rock and water falls. At this time, it was not yet completed, and there was no water yet. The boy fell and died”.

He noted that “Instead of reporting the accident to the appropriate quarters, again the church registered him as a victim of a hit and run driver. They sent the message to his wife who came, identified the body and was given 10, 000 Naira for the burial. My concern is that the man died in active service. His funeral responsibilities should have been taken over by the Church. Besides, I did not see the need for cover up. It was accident and accidents do happen at constructions sites, so why the cover-up”.

Pastor Godswill Agomoh also exposed what he called the trickery that is often adopted by T.B. Joshua to woo unsuspecting minds about his healing prowess. That includes brainwashing patients into believing that their problems can only be solved by T.B. Joshua.

And that any patient who would not heed to that counselling will either have his/her healing short-lived or their problems would become more than they brought to the Synagogue. In that state of fear and insecurity, the vulnerable patients accede to any direction from junior prophets of the Ministry.

One of the many people, who Pastor Godswill revealed was used for the crocked trickery of T.B. Joshua, was one Maxwell Injeh, who was said to have been healed of his paralysis at the Synagogue Church of All Nations.

Although Maxwell Injeh insisted that he was healed at the Synagogue, Pastor Agomoh Paul, said Maxwell had no paralysis and that he had a serious waist pain but not a spinal cord injury.

“He went to have a drink and on his way up the staircase he missed his steps and fell. He had serious waist pain no doubt but it was not a spinal cord injury”, he narrated, adding that when he was brought to the Synagogue, he went to Maxwell and “observed our normal prayer pattern which is to massage his back and waist. When I was done I asked him to walk and he walked with me”.

“He moved round the car park and we observed that his case was that serious. Thereafter Yinka and Latian the head of the “brainwash” team came; they sat him down and began the brainwash. They told him that although the junior prophets had prayed for him “the grace is not enough”. That he needs the confirmation of Prophet T.B. Joshua himself, otherwise his testimony would be short-lived. They told him that within one week he risked being totally paralysed. He agreed.”

He disclosed that Maxwell's wife was asked by the leadership of the “brainwash team to exaggerate how bad and difficult it had been carrying Maxwell up and down in the wheelchair because he could not walk or use the toilet on his own. And they agreed.

But Pastor Godswill Agomoh Paul left the Synagogue Church some four years ago and so why is he speaking out now? Read the next publication soon…