WHY I SUPPORT OIL SUBSIDY REMOVAL, BY SEN NWAGWU 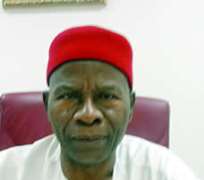 •Nwagwu
The senate committee chairman on foreign affairs, Senator Mathew Nwagwu representing Okigwe North senatorial destrict of Imo State has described the budget as one of hope. He gave reasons why he and some of his colleagues supported the deregulation of the down stream sector of the petroleum industry. Senator Nwagwu decried the neglect of Okigwe as an ancient city and one of the old provinces.

Excerpts:
The 2012 budget
Now that the budget has been presented by President Goodluck Jonathan, we are keen to see and know what it means for our people, as Nigerians are eager to know if the issues that concern them are captured in the budget.

The Senate has set up a committee on infrastructural monitoring. For instance in Okigwe, we are still battling with bad roads, of course you know that Okigwe like other old provinces is yet to be developed while other provinces had been turned into states, or more local government areas created out of them or turned into modern cities. So, through the infrastructural monitoring committee, the roads in Okigwe will be given attention. This becomes important because some roads in the area are terribly bad. Also water is another great challenge we face. I always say, it is unfortunate that we are still discussing about how to give our people basic amenities such as clean water.

Another problem we face is environmental control. Okigwe is devastated by erosion in some Local government areas, and we hope to improve the living standard of the people. We'll make sure these problems are addressed.

However, one of the limitations in budget implementation is lack of cash flow, or lack of release of cash meant for projects. So we will ensure that the budget is implemented because, now that government has removed oil subsidy, the budget is predicated on the fact that the subsidy will be removed, therefore we will have a different kind of budget and implementation.

Oil subsidy removal and expected hardship
The monitoring team or method has always been there, but more importantly, the senate is involved through over sight functions, and it is through this we ensure that a budget is implemented. Now the first question you must ask is whether the budget has the cash backing? So if it has the cash backing, good, something meaningful has to be achieved. For instance, if a road project is embarked upon and at the end of the period when the road is completed the public must be made to know how much was spent in road construction. Then it is up to the Senate which has been monitoring such projects to ensure it is done. For instance, that the roads had been completed in line with specifications as stipulated in the contract so the blame will be for all if it is not complied with. But first of all, the budget must be funded or you will monitor white elephant project. The executive and the legislature must work together towards ensuring that the budget is implemented.

Imo and NDDC project
Yes, I have taken account of that. There are a good number of Niger Delta Development Comission (NDDC) abandoned projects because they were not funded. So I'm assuring you that the 2012 budget will take care of them and ensure they are executed.

Deregulation of the oil sector
You will agree with me that goverment is making effort to inform the people of the benefits the nation will derive from fuel subsidy removal. Government is doing this awareness campaign through the media, conferences, workshops and symposiums on the benefits of subsidy removal and government has assured the people of its sincerity in investing the proceeds from the subsidy in the development of infrastructure. So, I want to use this medium to assure my constituent that they should trust the government. Yes, you already know my position on subsidy, I am one of the people who supports the removal of fuel subsidy on the grounds that the proceeds should be properly applied. For instance, the transport sector should be improved through construction and maintenance of roads so that when people are paying higher for petrol, they will see that the proceeds are used to better their lives.

Moreover, like you rightly know, if the sector is liberalized there will be room for investors to come in and invest in the sector. For instance, if you set up a refinery and get crude oil at a certain price and sell at a certain price that will open door for competition, and also open up the economy and the price of the product will be forced down because as you know, there is no competition in the oil sector rather what we have been doing is buy crude for one dollar, refine and sell for 70k. Of course, under this kind of arrangement, nobody will invest in the sector, but if it is liberalized and made open, people will invest and competition will now drive down the price.