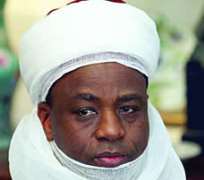 •Abubakar
What started as a harmless movement by a religious sect in some parts of Northern Nigeria gradually snowballed into one of the worst terrorist uprisings that the nation has witnessed. CHINELO OBOGO x-rays the origin and the political undercurrents of the activities of the sect known as Boko Haram.

The emergence of the sect
In 2002, a group which called itself 'People Committed to the Propagation of the Prophet's Teachings and Jihad', which is the English translation of Jama'atu Ahlis Sunna Lidda'awati wal-Jihad was formed by one Mohammed Yussuf, a young man from Yobe state who believed that he was a holy prophet.

The sect which was formed in Maiduguri, propagates their ideology that says that western civilization is sin. This belief gradually earned the group the name 'Boko Haram' which in Hausa translates to 'Boko' which means 'Western Education' and 'Haram' which means 'sin'.

Originally, it seemed that the group, now named Boko Haram started as a peaceful sect that propagated the gospel of Islam and the establishment of Sharia law under the leadership of the former governor of Borno State, Amodu Sheriff. In furtherance of the ideologies it propagated, the leader of the group, Yussuf Mohamed established a building that housed a mosque and an Islamic school where many children and youths within the north and neighbouring countries like Chad and Niger attended and were indoctrinated on the controversial doctrines of the sect.

The dimension of violence
But the seeming peaceful operations of this religious sect gradually snowballed into a tumultuous one when in 2009, the government launched an investigation into the group's activities following reports that its members were arming themselves and were strategizing on waging a religious war in the country. With time, the sect's activities turned into a full blown war when its members, many of whom were allegedly citizens of neighbouring African countries started engaging in suicide bombings. From 2010, different bomb attacks had rocked many parts of Northern Nigeria killing many people in the process. The sect claimed responsibility for many of these attacks and vowed that they would not relent in their fight against Westernization.

However, what political analysts found most puzzling is the way the sect operates and many wondered those who were behind its funding. At first, there were speculations that some northern leaders were behind the group and the attacks were a ploy to destabilize the government of President Goodluck Jonathan. What may have led to this conclusion was the vehement way in which the President's election bid was opposed by many northern leaders who felt it was the turn of the North to produce the president. Though it was denied, some national dailies reported that some eminent northern leaders had allegedly threatened to make the country ungovernable for the President if he emerges as the President. These speculations further strengthened the arguments that the Boko Haram attacks may be politically motivated.

But in response to the reports, former governor of Kaduna State, Balarabe Musa told Daily Sun in a telephone interview that the on-going upheaval and mayhem caused by the Boko Haram sect should be regarded as a national issue rather than a regional affair.

He stated that contrary to popular opinion that the mayhem caused by the sect was being supported by the north and as such was a regional affair, the group's activities was a national issue and should be seen as such.

His words: 'It is time that the country sees the Boko Haram issue as national. It is not supported by the north and should not be seen as a regional affair. We in the north do not support the killings and we will never support it, but like the response of the Federal Government to other upheavals that were caused by other groups in the past, it should also approach the issue the same way. The government should dialogue with them and know what their demands are and seek peace. For now, we do not really know what they want and what their demands are, so it is the responsibility of the government to find out what they want just as they did in the case of MEND.

'Some people are linking the bombings to the northern leaders and this is unreasonable. It is wrong to jump to the conclusion that because some people said that they will make the country ungovernable for Jonathan, therefore it is the north that is sponsoring this sect. MEND had threatened to make the country ungovernable in the past, we also had the NADECO bombings, MASSOB at a point in time started causing mayhem and so did the OPC and none of the leaders of the region where they came from was accused of sponsoring them. Why are people now insinuating that it is the northern leaders that are sponsoring this sect? It is unfortunate that the case of Boko Haram seems to be more critical, but like I said, the FG should dialogue with them and find a way out just like it did with the militants in the Niger Delta.'

The President of Arewa Youths Consultative Forum, Shettima Yerima also debunked the speculations that the north was sponsoring the activities of the government. Also speaking in an interview with Daily Sun, he said 'Firstly, I do not believe that Boko Haram exists but I know that some people have taken advantage of the situation in the country to perpetuate wickedness which I condemn in its entirety. No doctrine allows for violence and the action of this sect is far from Islamic teachings.

They are just hiding under the cloak of Islam to perpetuate injustice and that is very wrong. As far as I am concerned, what they are doing is contrary to Islamic teachings and the north is not in support of it. Any person can go to the north and decide to plant a bomb in the north and claim he is of the Boko Haram sect, anybody could have done that. Secondly, if they are sponsored by the north, why do they still go around killing the same northerners that is said to be sponsoring them? 'But this defence may seem to have been punctured when a spokesperson of the sect, Ali Sauda Umar Konduga who was arrested by the State Security Service (SSS) last year allegedly named a serving Senator from Borno State, Ali Ndume, a former governor, Amodu Sheriff and a former Ambassador as being their financial sponsors. He allegedly revealed in his confession that Senator Ndume usually provided them with phone numbers of eminent people whom they sent text messages to and even wrote text messages which Ndume forwards to them and they in turn forward to their targets.

But while the arguments on whether the sect was sponsored by the north continued, it seemed to changed its modus operandi and started carrying out attacks on churches. The most tragic violence that was perpetrated was a bomb attack carried out on 25 December, 2011 on a Catholic Church in Suleja, Niger State. Ove30 persons were killed in the attacks and this sparked off reprisal attacks on northerners who stay in the southern part of the country.

Reacting to the series of attacks on Christian worship places by the sect, the National President of the Christian Association of Nigeria (CAN), Rev. Ayo Oritsejafor appealed to northern religious leaders to go beyond condemning the attacks and do something practical to salvage the situation. Oritsejafor, who gave the warning while addressing the media said, 'We are not satisfied with the reactions of the northern leaders. They have not done enough. They must go further than coming out to condemn the attacks and killings. There are many other practical things they can do because they are on ground. If they don't, the situation is going to consume them. We hope they will do what they have to do. We are working and waiting,' he said.

But the Sultan of Sokoto, Alhaji Sa'ad Abubakar dismissed claims that the sect hasn't been admonished by leading religious leaders. In a press briefing with newsmen he said, 'Have we not been speaking out? Did you read the press statement I issued out the other day? What else do you want us to say? We are totally against what has been happening, we totally condemn all these. Nobody can take anybody's life, its un-Islamic, its ungodly, nobody can take anybody's life. All lives are sacred, must be respected and protected by all. So we have been speaking out.'

Alhaji Abubakar further added: 'I want to assure all Nigerians that there is no conflict between Christians and Moslems, between Islam and Christianity. It is a conflict between evil people and good people and the good people are more than the evil doers. The good people must come together to defeat the evil ones and that is the message. We want to assure all our Christian brothers and leaders that we stand on the part of truth according to our religion that we will continue to work Insha Allahu for the greatness of this country.'

He reiterated that there was no enmity between both different religions, adding that the government will do all it can to confront the problems facing the country. 'As I said there is no conflict between Islam and Christianity and I want to assure that we will do all we can to ensure that it stops.'