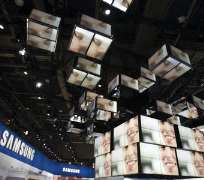 Samsung Group, which includes Samsung Electronics Co, said on Tuesday it is raising its 2012 investment to a record $41.4 billion, underscoring the widening gulf between the dominant South Korean conglomerate and its faltering competitors.

Best known for making massive investments in new technologies ahead of rivals, Samsung is now banking on logic chips and OLED displays to repeat its roaring success in flash chips, computer memory chips and LCD flat-screens, even as a gloomy global economic and IT spending outlook forces its peers to be conservative in spending.

"Samsung's got strong cash flow to make bold bets in new technologies," Lee Sun-tae, an analyst at NH Investment & Securities. "No other IT company can beat it in terms of investment and that's how Samsung finds new revenue sources ahead of rivals and widens its gap."

The group also said on Tuesday it would add a record 26,000 employees this year, up from last year's 25,000, at a time when tens of thousands of jobs in the financial industry are being cut globally due to continuing turmoil in markets. Samsung now employs around 350,000 in total.

The investments will be in everything from building factories to research and development activities to doing mergers and acquisitions and hiring.

SYSTEM CHIPS VS MEMORY CHIPS
Of the total investment, capital spending will amount to 31 trillion won, up 11 percent from a year ago, Samsung said in a statement.

Some 25 trillion won, or 80 percent of the capital spending, will be from Samsung Electronics, the world's biggest technology firm by revenue, and its display unit, mainly to boost capacity of system chips and OLEDs, said analysts.

Investment in system chips such as mobile processors and sensors used in smartphones, tablets, and cameras is likely to exceed spending on its bread-and-butter memory chips for the first time, reaching 7.5 trillion won, or some 1 trillion won higher than investment in memory chips, they predicted.

Investment in OLED is likely to rise to 7 trillion won from last year's some 5 trillion won, and the rest will be spent on LCDs, rechargeable batteries and LEDs, they said.

Samsung Electronics makes mobile processors to power Apple's iPhone and iPad as well as its own Galaxy line of mobile products. Its display unit, Samsung Mobile Display, is also a near monopolistic supplier of OLED displays, which are mainly used in high-end mobile gadgets and are set to become dominant in TV screens to replace LCD.

OLED display revenues are expected to exceed $20 billion by 2018 to account for 16 percent of the total display industry, up from the current 4 percent, according to research firm DisplaySearch.

The record investment plan comes after Samsung Electronics said on Monday its U.S. unit was planning to sell around $1 billion in bonds, its first major overseas debt sale in more than a decade, to fund its chip plant operation.

Samsung didn't detail whether the funds will be used to expand capacity at Austin, Texas, its sole and biggest overseas chip plant, which makes chips for Apple products.

Samsung normally finances its investment with internal cash and had around 22 trillion won in cash as of end-September. It is set to report a record 5.2 trillion won in fourth-quarter operating profit next week, according to its preliminary results.

DIVERGES FROM KEY RIVAL
The record spending, which is up 12 percent from last year's 42.8 trillion won, comes as its key home rival LG Group cut its 2012 investment by some $3 billion amid an uncertain global business outlook. LG Electronics Inc and LG Display are part of the LG Group.

LG Display, which vies with Samsung for the title of the top flat-screen maker globally and is also aggressively expanding into OLED, plans around 4 trillion won investment this year, little changed from last year and just around half of the budget Samsung is likely to spend on flat screens this year.

Samsung Group comprises around 80 companies. Its business portfolios expand from financial, construction and shipbuilding to medical services and consumer electronics and total revenues account for some 20 percent of South Korea's 1,200 trillion won GDP.