NEPAD ON THE GROUND 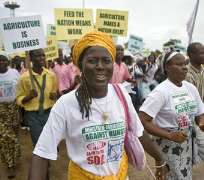 Over the past 10 years, the New Partnership for Africa’s Development (NEPAD) has launched a number of bold and innovative programmes. In some instances the plan is already scoring notable yet underreported gains. Africa Renewal highlights NEPAD’s impact in five key areas.

Through its ICT Broadband Infrastructure Programme, NEPAD aims to connect all African countries to one another and to the rest of the world by broadband optical fibre. To this end two cable systems, one submarine (Uhurunet) and another terrestrial (Umojanet) are currently being built (see map). Uhurunet, representing an investment of around $700 million, is scheduled for completion in 2012.

NEPAD has also launched the e-Schools Initiative, to improve the quality of teaching and learning in African secondary and primary schools using information and communication technologies (ICT). Sixteen African countries and more than 80 schools participated in the NEPAD e-Schools demonstration project. Each school was equipped with a computer laboratory containing at least 20 PCs, as well as a server and networking infrastructure and peripheral devices such as scanners, electronic whiteboards and printers. To date, many challenges remain. But the NEPAD Agency and its partners are striving to address these in preparation for expanding the initiative across the continent.

Created in 2007 with funding from the government of Spain, the NEPAD Spanish Fund for African Women’s Empowerment promotes efforts to eradicate poverty and advance women’s economic capacities and opportunities.

A total of €6.285 million (around $8.5 million) has been disbursed to 46 projects in 23 countries. So far 31 of those projects have been completed. Their results have included an increase in the number of women and girls trained in vocational skills such as ICT, the creation of employment opportunities and improved income-generating activities for women, the establishment of microcredit schemes, and an increased awareness of gender-based violence, as well as the creation of mechanisms to address the problem.

Recently the fund allocated €2 million (around $2.7 million) for setting up a Business Incubator for African Women Entrepreneurs in Eastern, Southern and Western Africa.

With its Comprehensive Africa Agriculture Development Programme (CAADP), NEPAD is pushing for substantial changes in how agriculture is done in Africa. The programme’s focus is on helping African countries improve economic growth through increased investment. CAADP’s key goal is for 10 per cent of all national budgets to be invested in agriculture. As of May 2011, 26 countries had signed the CAADP compact and incorporated it into their agricultural strategies. Eight countries now exceed the 10 per cent budgetary target and most others have made significant progress towards that goal. To date nine countries have exceeded CAADP’s target of an average annual agricultural growth of at least 6 per cent.

NEPAD has also put in place or supported various programmes, including the Partnership for African Fisheries (PAF), to guide continent-wide reforms in the fisheries sector. Besides helping countries design regional fisheries plans, PAF is currently implementing a pilot project in Ghana and Sierra Leone, with a budget of around $3 million. Its total budget for 2009–2014 is more than $11 million.

The Fertilizer Support Programme has led to an increase in the number of small-scale farmers across Africa using chemical fertilizers to enhance crop yields. And in 2005 NEPAD launched a regional initiative, TerrAfrica, to improve land management.

Launched in July 2010 at a summit of the African Union in Kampala, Uganda, the Programme for Infrastructure Development in Africa (PIDA) aims to establish a strategy for developing regional and continental infrastructure in transport, energy, across-border water management, and information and communication technologies. PIDA will guide policies and investments in these sectors from 2011 through 2030. It brings together into one coherent programme previous continental infrastructure initiatives such as the NEPAD Short-Term Action Plan, the NEPAD Medium- to Long-Term Strategic Framework and the AU Infrastructure Master Plan.

The PIDA budget, estimated at €7.8 million (around $10 million), is financed by the European Union, the Islamic Development Bank, the African Fund for Water and NEPAD. The African Development Bank is responsible for implementing the programme.

Adopted by a summit of the African Union in 2007, the Pharmaceutical Manufacturing Plan for Africa aims to encourage local production of medicines, which currently are largely produced by foreign pharmaceutical companies. It supports African countries in designing strategies and building skills to engage in and promote indigenous pharmaceutical innovation. Toward this end, NEPAD has published a strategic document, Strengthening Pharmaceutical Innovation in Africa.