Exact Amount Paid For Subsidy By NNPC Not Known - RMAFC 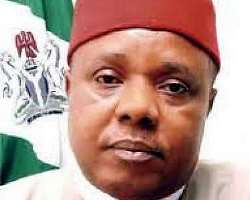 Mbam, who said this while appearing before the House of Representatives ad hoc committee on subsidy regime also disclosed that a total of N1.262 trillion was paid as subsidy between January and September 2011.

Officials of the NNPC and the Petroleum Product Pricing Regulatory Agency (PPPRA) have been accused of colluding with importers of petroleum products and security agencies at the ports to steal billions of naira using bogus fuel cargo import documentation and inflated invoices.

Meanwhile, the federal government has earmarked N155 billion for the payment of anticipatory arrears on subsidy for in the year 2011, THEWILL can report today.

The RMAFC Chairman stated that “As of now, the management of subsidy is not clearly defined between the NNPC, PPPRA, Ministry of Petroleum Resources and Ministry of Finance. This has created doubt as to the true quantum of subsidy per litre and the total consumption of petroleum products in the country.”

He explained that “Presently, the funding is being deducted from source while only the balance is remitted to the federation account for distribution. This by implication reduces the distributable pool to the three tiers of government thereby affecting their capacity to perform their statutory responsibilities.”

According to him, “the subsisting subsidy regime has resulted in huge deductions of revenue due to the federation account, particularly by the NNPC, as well as direct payment to PPPRA for payment to marketers.

On monitoring, Mbam noted that the subsidy process lacks proper monitoring saying, “there is no effective process of subsidy regime to determine the actual subsidy requirements of the country viz-a-viz local and imported products.”

In his presentation, the Director General, Budget Office, Dr. Bright Okogu explained that in spite of the subsidy removal, the federal government budgeted N155 billion to pay for arrears of subsidy to marketers. He said “we have put that amount in anticipation there is a lag when marketers submit claims. We don’t want a situation where they make claims over supplies made before December and we won’t be able to pay.”

On why the subsidy figure rose from the N246 billion appropriated to over N1 trillion, the Director General explained that ‘the gap was very much due to exchange rate, consumption etc and we had no idea that the oil price would rise to between N100 and N120. That estimate was done with the best information available to the Budget Office.”

Earlier in his welcome address, chairman of the committee, Hon Farouk Lawan said the findings of the committee would be used to guide the House in taking a final decision on the issue of subsidy.