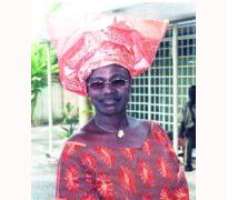 One of the three wives of Adeniji Samuel, an accident victim, who was killed by the driver of popular Yoruba actress, Mrs. Idowu Phillips a.k.a Iya Rainbow, has rejected the N100,000 offered for settlement by the actress.

www.nollywoodgists.com gathered that Iya Rainbow offered the money to douse the matter so that it does not generate undue publicity.

The late Adeniji, who until his death was married to three wives and had seven children, was knocked down by Iya Rainbow's drunk driver, while driving her green 4-Runner SUV with registration number RA 698 KJA, around Oshodi, Lagos State.

According to a member of the Adeniji family, Iya Rainbow wanted to play smart by offering the deceased's first wife N100,000 to forget the matter, but she rejected the offer.

It was gathered from a reliable police source that Iya Rainbow has not been coming to the station, instead, she has been sending her daughter.

Mr. Adeniji Samuel, until his death, was an Administration Officer with one of the new generation churches in Lagos and was killed right in front of the church.

The police have promised to charge the case to court, should Iya Rainbow fail to settle the matter amicably with the deceased'sfamily.