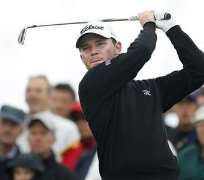 South African Branden Grace played with admirable composure to win his first European Tour title with victory in the Joburg Open by a stroke with a level-par final round of 72 on Sunday.

Grace finished on 17-under-par, one stroke ahead of Briton Jamie Elson, who catapulted himself into second place with an outstanding nine-under-par 63.

The 23-year-old began the final round with a three- stroke lead over compatriot George Coetzee and Briton Richard Finch. They were all playing in the final three-ball after weather delays on the first three days of the 1.3 million euro event.

Finch crashed to a six-over-par 78, three-putting three times on the front nine, to end nine shots off the pace.

Coetzee closed to within two shots of the lead with birdies on the fifth, sixth and eighth holes, but the burly South African faded on the back nine after a double-bogey on the par- four 13th when he hooked his approach shot into the water.

Grace, a former member of the Ernie Els Foundation, put together nine straight pars on the back nine to hold off Elson and six golfers who finished in a tie for third on 14-under -