BOKO OR ISLAM HARAM GOVERNMENT CARE LESS ABOUT OUR ISSUES 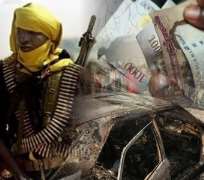 The gruesome pictures of dead Nigerians killed for protesting the last straw will hunt us forever. Nigeria’s problem is not oil subsidy, subsidy is the symptom of greater evil that ails the Nigerians working hard ready to go anywhere to make a living. Those losing their lives protesting on the streets have had it: enough is enough. If they cannot survive at home, they will shed their pride to make it out of town. The irony of it is most Nigerians never get government handouts, the rich do. They shun the easiest way to make money.

Foreign partners of our politicians and their business cronies will tell you there are four money generators in Nigeria – foreign contracts, Arm dealers, outdated security gadgets and violence. Each related and patronized to bleed Nigeria financially; and to death. Yet, these same hypocrites would usurp the protest of the masses as their grievance too. All their police might that cannot catch Boko and Islam Haram is used to kill protesters.

How do we get out of all this mess? The way we got into it. Unpopular 1996 DECREED Federal Government too powerful and ignored people’s wish for true confederation. We then created a honey pot at the center to attract looters. We have been rewarding the most virulent militants to the Government by military, religious and rebellious violence. Boko Haram, Islam Haram, MEND, OPC, MASSOB realize it and fight their way to power.

What is even more petrifying is how deep some of these militants have penetrated and were retained at the highest intelligence. The President of Nigeria was warned by no less a heavyweight than a former minister Ciroma predicting the calamity we find ourselves today. On the other hand, fingers were pointed at the President when he was Vice and another leader of the Army as Niger Delta commanders of terrorist groups. Both traditional political allies compete for power to undermine and expose each other by violence, as the blood of the innocent flows.

Nigeria is sinking deeper into chaos. We prayed so many times that the Country does not turn into Lebanon. We even assured others that not a single Nigerian will die for a cause or money he cannot enjoy alive. The new wave of bombings from the South to the North where the innocents, students, babies and old people are killed and kidnapped bear an ugly face compared to twenty years ago, we would not imagine when warned.

Nigeria is like that baby in some holy books that neo-colonialism is ready to cut into two for Christian and Islam, three for Indigenous religion or four for atheist as individual parents claimed this baby found in potentially rich African Continent. The only problem is that if this baby, as big as an elephant, is cut into two, it will die. As wished by those waiting to divide us. It is no more Nigeria as we know it with all the beautiful, colorful and highly endowed land. So what part of this beautiful baby elephant do you want?

Boko Haram wants the sharia part, Islam Haram wants the Christian part, MEND wants oil rich areas, MASSOB wants the Biafra area, OPC wants the Oduduwa area, and the politicians want foreign contracts in all areas. The only people that want the whole baby elephant are the silent majority of poor Nigerians that want no part of a dead baby and are willing to let the baby remain whole in whatever hand so that the baby can survive. They are too busy craving a living to survive in their Country without fear of deportation.

On the other hand, others want out, cry enough is enough, they just want out of Nigeria, but nowhere to go! None of them can define South, North, East or West amicably. No African country is big enough to accommodate Nigerians; and Europe, Asia and America have removed their welcome mats. Some of us blaming those groups for returning to a part of the Country must have a place for them to start all over again after prospering the only way they know. Nigeria belongs to all as long as we respect our hosts’ diversity.

Many are adamant that there is hardly anyone that loves Nigeria except those on selfish missions. So far desperados are winning and Nigeria is being torn apart. Each see a part of the baby elephant like blind men and describe the characteristic of each part. In the holy books, the mother that wanted the baby won. But Nigeria is far from holy land or books. It is made up of those few that are so selfish, their ways of nothing – dead baby.

There is no need to hide under religion Jihad and Crusade. It is about subjugation, not about Nigeria self-interest. Religion is supposed to instill the fear of God in us so that Good Faith and Fair Dealings with one another can be accomplished. Instead greedy wise men dominated others by calling their gods and people they respected in their foreign communities as the only God and the only way to that god is through them.

Africans bought it wholesale, actually by retail and interest paying for it with their blood. The hypocrisy of either Boko Haram or Islam Haram is the war to wipe out one another because one is foreign; when in fact none of them is indigenous to Africa or Nigerians in particular. How can you deliver Africa from foreign religion by tulasi when Crusade or Jihad as a mission is anathema to most African religious conversion as Obangidi or Sango?

The picture of Christians at Iwo protecting the Muslims while praying is touching.

Solutions can be divided into immediate, mid-term and long-term. Immediately, put pending foreign contracts on hold and send all politicians back to their constituencies to listen to grievances leading to peace as part-time law makers paid on days they work until further notice. Designate certain Federal buildings or Barracks as relief centers for victims of bloodsheds and finance them with the rest of politicians’ benefits. No more government recognition of religious rites, subsidies or sponsor to Mecca or Jerusalem.

On Mid-term – The cost of government must be reduced by making them permanent part-time politicians with allowances only for days spent at Abuja for accommodation and food. The same goes for all state governments. Politicians do not need to work more than four scattered months in a year. Develop and encourage local talents. Go to Europe or America and ask school children what they are. Our children must pledge allegiance to Nigeria BEFORE any country, any religion and taught how to appreciate made-In-Nigeria. All materials used and brought to schools must be made in Nigeria.

On the long-term – A true confederation and share of revenues must be decided as a goal to make the Federal Government less attractive as honey pot. Reduce the states to four regions and the states to local councils. Our educational system needs national guidelines to each of the four regions. Local talents that are suited and geared to our environment are the only useful brains. No matter how good a brain, if it cannot relate to our culture and development, it is a useless brain.

Nigerians want solutions to greed and senseless mayhem in our midst that is foreign to our culture and furtherance of our being for survival. It is an insult to claim we are still young in our democracy when Africa has never been short of civilized way of life to rule empires. If we do not know where we are going with acquired socialism, capitalism, theocracy or hierocracy, we need to look back into our culture for adaptation to today.