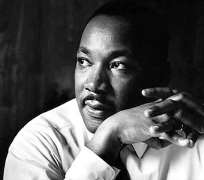 Sunday, January 15, marks the 83rd anniversary of the birth of American clergyman and civil rights activist Martin Luther King, Jr., in Atlanta, Georgia. Each year Americans honor Dr. King with a federal holiday on the third Monday of January, and invite the people of the world to join us in celebrating his legacy. As the U.S. Ambassador to Nigeria, I would like to personally extend this invitation to you.

Martin Luther King, Jr., brought justice to oppressed people using peaceful means for peaceful ends. He became famous for his contributions to the civil rights movement in the United States, but his impact and legacy extend around the world and have influenced subsequent non-violent movements from Tibet to Wall Street.

It was his non-violent actions, indeed, which continue to inspire us. What courage Dr. King possessed to face dangerous adversaries without a knife or gun, bear death threats against his wife and children without threatening others, even face prison and insults without striking a blow! He never stopped fighting for justice, but he never abandoned his commitment to the principles of non-violence.

Dr. King also acted with urgency, imagination, and persistence to achieve his admirable goals. He did not wait for others to act first or for unjust laws to change: he organized boycotts and marches which —over time—caused attitudes and laws to change.

While Dr. King lived most of his life in the American South, his struggle transcended America’s shores. He recognized a connection binding all non-violent human rights movements in what he called our “world-wide neighborhood.” His struggle against specific unjust laws in the United States was based on a fierce opposition to civil rights violations in general, and he took responsibility for speaking out against injustices wherever he saw them.

We are all even more inter-related in the age of the Internet and instant communication. That is why the United States is working with Nigeria to support this country’s efforts to achieve its destiny – a nation where good governance and justice prevail, a nation where corruption and violence have no place, a nation with an educated population with good jobs – so that the United States can realize its own destiny – safer, more prosperous, and interacting with a proud nation which shares in this security and prosperity.

If Dr. King were alive today, he would join us in unwavering condemnation of militants and terrorists who, out of frustration with their current condition, resort to violence. He would join us in support of basic human rights—including the right to free speech and the right to assembly—for everyone, regardless of their gender, religion, nationality, tribal affiliation, or sexual orientation, to deny belligerent citizens an excuse to incite violence against others. And he would reiterate that “non-violence is more than the absence of violence,” and reinforce the notion that conscious, persistent work towards peace is the only way to defeat violence and war permanently.

We celebrate Dr. King’s legacy every January because the lessons that we learned from him are universal and timeless. We still confront poverty and injustice in this world, and we still too often use violence to resolve our grievances. As we remember him this January, let us also remember the ideals for which he stood and apply them to our world today.