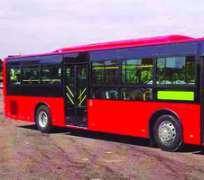 Vehicle manufacturers in the country have hailed the new mass transit scheme which requires the bus makers among them to build about 6,000 units of mass transit carriers between now and June, 2012. They said the rare patronage is capable of reviving the ailing sub-sector and stimulate even in the linked industries.

The auto makers who spoke through the Executive Director of the Nigerian Automotive Manufacturers Association (NAMA), Mr Arthur Madueke, also stated their commitment to the prompt execution of the order, and meeting the conditions built into the deal, including the establishment of maintenance workshops across the country to ensure the smooth operation of the vehicles.

All the buses to be produced by the Nigerian manufacturers must be of diesel engine type with 26 seats and above.

Madueke who was reacting to the patronage from the Federal Government as formally announced by President Goodluck Jonathan on Sunday, disclosed that apart from the initial batch produced by the auto makers for the launch of the scheme, they were expected to inject about 3,000 buses into the mass transit pool between January and March.

'Yes, it is a welcome development. It is the kind of patronage the auto industry has been yearning for, and we fully support the efforts of government to use the gains from the subsidy withdrawal to boost mass transportation and revive our industry'. Madueke told the  Daily Sun.  Commenting on the mass transit scheme after the meeting with the Trade and Industry Minister, the Director-General of the National Automotive Council (NAC), Dr Aminu Jalal, thumbed up for government for its decision to source the vehicles locally, describing it as a deliberate and sustainable  effort to use the new programme to achieve the dual goals of easing transportation problems and at the same time helping to revive the auto industry.

Preparatory to the launch of the mass transit scheme on Sunday, Dr Aganga had presided over a meeting in his office in Abuja, which was attended by the NAC Director-General, the NAMA Executive Director  and the concerned bus manufacturers, where the modalities were worked out. At the meeting were representatives of Innoson Vehicle Manufacturing Company Limited (IVM), Nnewi; National Truck Manufacturers (NTM), Kano; VoN Automobiles Nigeria Limited (formerly Volkswagen of Nigeria, Ojo, Lagos); ANAMMCO, Enugu; GM Nigeria, Lagos, Leiland-Busan Limited, Ibadan; Steyr Nigeria Limited, Bauchi; and A.G. Leventis, Lagos.

Speaking to the Daily Sun Motoring on the development, the Managing Director of NTM, Ibrahim Bayero, described the move by government as a welcome gesture which is in line with the yearning of the industry over the years, and stated his company's readiness to contribute to the success of the mass transit scheme. In his reaction, the Chairman of the Innoson Group, Chief Innocent Chukwuma (OFR), described the decision of the Federal Government to source a large number of the buses for the mass transit programme as an action that would impact positively on the industry, especially in terms of raising capacity utilization and creation of jobs.

'We thank the President for making good his government's promise to encourage the domestic auto industry through the patronage of its vehicles. We on our part will reciprocate by producing top quality buses that will stand the test of time. Some of us have already put in place workshops at strategic locations in various parts the country, so that the buses wont have after-sales problems', Chukwuma said. President Jonathan had on October 15, 2010, personally commissioned Innoson's plant in Nnewi, where he commended the company's wide range of buses, pick-ups, SUVs and refuse management vehicles. He instantly called for support for locally based manufacturers with the kind of courage displayed by the plant.

Though seven auto companies manufacturing buses in the country are participating in the execution of the contract to make buses for the new mass transit programme, only four of them jointly supplied the initial batch moved to the Eagle Square, Abuja, hours before the President flagged it off on Sunday.

They are Innoson, NTM, ANAMMCO,  and VoN.