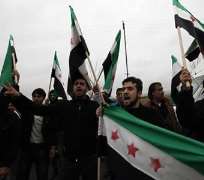 Several Arab League monitors have left Syria or may do so soon because the mission has failed to halt President Bashar al-Assad's violent crackdown on a popular revolt against his rule, an Algerian former monitor said on Thursday.

Observers have not ventured out on tours of restive areas since 11 of them were injured by pro-Assad demonstrators in the port of Latakia on Monday, an attack which also sidelined plans to expand the team. A League official had said they would resume work on Thursday once new safety measures were in place in agreement with Syrian authorities.

Syrian opposition groups say the monitors, who deployed on December 26 to check whether Syria was respecting an Arab peace plan, have only bought Assad more time to crush protests that erupted in March, inspired by Arab uprisings elsewhere.

Anwar Malek, an Algerian who quit the monitoring team this week, said many of his former colleagues shared his chagrin.

"I cannot specify a number, but many. When you talk to them their anger is clear," he told Reuters by telephone, adding that many could not leave because of orders from their governments.

He said a Moroccan legal specialist, an aid worker from Djibouti and an Egyptian had also left the mission.

Their departures could not immediately be confirmed. But another monitor, who asked not to be named, told Reuters he planned to leave Syria on Friday. "The mission does not serve the citizens," he said. "It doesn't serve anything."

Arab League Secretary-General Nabil Elaraby said Syria had only implemented parts of the agreement it had signed. "Neither the violence has stopped, nor the killing. The level has dropped, but it has not stopped," he told al-Hayat television.

The Arab League, which will hear a full report from the monitors on January 19, is divided over Syria, with Qatar its most vocal critic and Algeria defending steps taken by Damascus.

The mission, the first of its kind the League has mounted, is led by Sudanese General Mohammed al-Dabi, who has come under fire from rights groups over his role in the Darfur conflict.

"CHILLINGLY CYNICAL"
U.S. Secretary of State Hillary Clinton said on Wednesday the mission could not continue indefinitely and dismissed a speech Assad delivered this week as "chillingly cynical.

Assad, breaking a six-month public silence on Tuesday, disparaged the Arab League, which suspended Syria in November over its bloody handling of the unrest. He blamed the upheaval on "terrorists" whom he would punish with an iron fist.

The conflict in Syria, in which insurgents have joined what began as a mostly peaceful movement to end 41 years of Assad family rule, has killed more than 5,000 people, by a U.N. tally. The government says 2,000 soldiers and police have been killed.

A French journalist, Gilles Jacquier, was among nine people killed in the rebellious city of Homs on Wednesday in what the state news agency SANA said was a mortar attack by "terrorists."

Jacquier, the first Western reporter killed in Syria in 10 months of unrest, was in a government-escorted media group visiting a pro-Assad neighborhood of the divided city, which has been racked by protests, crackdowns and sectarian violence.

As with three deadly explosions in Damascus in the past few weeks, Assad's critics have suggested the authorities staged the Homs attack to reinforce their argument that Syria is facing foreign-backed militants, not a broad pro-democracy revolt.

"This killing is indicative of the transition of the Syrian regime from preventing press from freely working and covering the events in Syria to killing journalists and media personnel, in an attempt to silence neutral and independent media sources," the opposition Syrian National Council said in a statement.

Syrian expatriates from Europe, North America and the Arab world set off from Turkey in a protest convoy on Thursday, headed for the Syrian border to draw attention to the plight of people in their strife-torn homeland.

"REPUGNANT ACTIONS"
Malek's withering public criticism dealt a further blow to a mission that the Syrians had long resisted.

"I resigned from the monitoring mission when it reached a dead end and I became certain that I was serving the Syrian regime, (which) was exploiting us for propaganda," he said.

Malek, who is now in Qatar, said violence by security forces had continued unabated during his stay in Homs. "We were giving them cover to carry out the most repugnant actions, worse than was taking place before the monitors came," he said.

Qatari Prime Minister Sheikh Hamad bin Jassim al-Thani, who heads the Arab League committee on Syria, said doubts were growing about the effectiveness of the monitors.

"I could not see up until now a successful mission, frankly speaking," he told a joint news conference with Clinton in Washington. "We hope we solve it, as we say, in the house of the Arabs, but right now the Syrian government is not helping us."

However, Algerian Foreign Minister Mourad Medelci said Assad's government had taken some actions to defuse the crisis, citing a withdrawal of heavy weapons from cities, the release of a few thousand prisoners and an opening up of the media.

He acknowledged that all of these were incomplete responses to the terms of the Arab peace plan, but said it was the taking up of arms by the opposition that threatened wider violence.

"The feeling is that the government of Syria is in the process of making more of an effort, but the Arab League is especially having problems with the armed opposition," he said.

Any admission that the monitoring mission has failed will pile pressure on the Arab League to refer Syria to the U.N. Security Council, although a Western diplomat there said Algeria, Iraq and Egypt were likely to oppose such a step.

Western powers say Russia, a long-standing ally of Damascus, has blocked any tough moves by the council against Damascus and only a direct appeal by the league could shift Moscow's view.