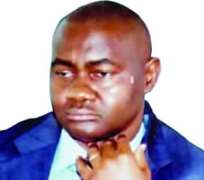 • Abe
Senator Magnus Abe represents Rivers South-East senatorial district in the Nigerian Senate. Prior to 2011 general election, he was the Secretary to the Government (SSG) River State. In a recent interview with some journalists in Lagos, the Senator shared his views on the amnesty programme of the Federal Government, insecurity in the country, and other national issues. NDUBUISI ORJI brings the excerpts:

Why I contested election into the Senate
I do not know what you mean by chummy job. The greatest privilege a man can have is the privilege of representing other people. No matter how chummy the job of SSG could be, you are not representing your people. For a politician, the highest honour is the honour of an election. So to have the privilege and honour to represent over one million people of my senatorial district is the highest privilege that I have ever been given.

And I don't think there is anything you can compare to that. The privilege of serving as SSG was a high honour and privilege, given for me to me by my friend and brother, the governor, and I did my best. But when the opportunity to represent my people in the senate came up, even the governor was very excited. There is no comparison between the two. There are two separate things entirely. I am sitting here talking to you; I am a senator of the federal republic. It is not a little honour or privilege for you to serve in the Senate of your country. Even, if I am not paid here, I will still be happier than being secretary to government.

In truth, the governor of Rivers State and the Rivers State government under his leadership at the time, we did not think that the amnesty should have been the kind of amnesty that was done, we didn't think so. We already had a programme in Rivers State. We have a rehabilitation camp, we have our social rehabilitation committee, and the amnesty people actually learnt a lot from what we were doing, but we didn't give anybody money, and we did not think there was any rational reason why you should give money to people who have carried arms against your country and did things we all have agreed was not to be done.

Yes, we could forgive them; try to reintegrate them, but we didn't want to give them privileges above the rest of society, we didn't subscribe to that. So we already had our own programme and the amnesty programme borrowed some things from us. But that one of paying people, who are not doing anything, who had committed crime; when there are so many people who equally need opportunity within the economy, we didn't support it.However, once the federal government took the decision on amnesty, as Nigerians, we had to respect the views of the federal government and cue into the programme and ensure that it works. But in principle, it is important for posterity records to show that we did not support it.

Amnesty programmes has succeeded but…
Well, it has achieved what it was intended to achieve. At least, the oil production has gone up, and there is less violence in the Niger Delta region. But not in terms of the long term interest of the people of the area. I will commend the present approach of the present manager of the amnesty programme which is the focus on education. We are total believers in education and any money you put into education is not wasted. I believe investing in education will always yield something positive at the end of the day.

Outside of investment in education; paying money to people who are not doing anything, giving opportunities to people who have not earned their weight properly in the society, in the long term may not be very helpful to the overall health of the society.

How to tackle Boko Haram and insecurity in the country

I have told you that I will always respect the Governor of Rivers state for his personal courage. Fighting this kind of insurgency has different roots and different ways. You cannot import what we did in Rivers State and transplant it to Borno.

But what I want to say clearly, is that the first thing against this kind of attitude would be leadership by the local community, and courage on the part of the leadership, and consistency in whatever approach you have adopted. And the leadership must adopt consistent approach. I don't know the particular circumstances of this Boko Haram, but I believe that in all kinds of insecurity, you have to adopt your measures according to the local circumstances, but certain things are consistent. You have to invest in security. That is why I commend Mr President for voting more money for security in the 2012 appropriation. But money alone doesn't solve problems. Money without proper leadership, monitoring and commitment will not get you there. But you must have money to be able to fight (insecurity). Because whatever instruments you chose, ultimately has to be paid for. So money is key, but a lot of other factors are involved.

As a member of the Security Committee in the Senate, I have been briefed severally by the National Security Adviser (NSA) and Director General of the State security Service (SSS), and I must say that I am very impressed by what they have told us as a Committee, which includes me as a person, and what I have seen because security detail is not what you discuss in public, but I know that quite a lot of work has gone on. But like I said, the whole thing is about constitency. You don't give up easily, but if you are persistent and you are consistent , you get your result.  You need to be focused, consistent and avoid distractions as well as full political support of the leadership and the community.

In Rivers State when we brought in the Military Joint Task Force (JTF), the people were saying that they did not want the military in the Niger Delta; we insisted that they must be there. And we kept talking to the soldiers that if you lose the battle for the minds of the people , regardless of what you win in the field , we will lose at the end. But the real key to this challenge was getting the public to trust us, the government, that we are the good people and these guys are the bad guys.

If you don't achieve that you are wasting your time. With that confidence, the criminals lost out, because everybody now felt that the government were the good people who were protecting them, and these people were the bad people, so they didn't find succour in the community. So, these are critical elements in the battle against insecurity. You must have the support of the community, and that support will not be freely given. When we came, the people were hailing the militants as their saviour, we turn that around for them to see the government as the person that is standing for them.

So, it is a hydra headed challenge, but it is not insurmountable. Several countries has had such challenges.   there was a time in Israel when bombs were going on every day. They solved it. It is not something to despair over, it is a challenge, but it can be overcome.   The seventh Senate which I belong to is a united family. Everybody works hard to promote it as such. The commitment of this Senate to contribute something to this country is clear to everybody.

I think this seventh Senate will acquit itself before the Nigeria people.

What I always say is that the people need to support the legislature. When you don't support the legislature, you don't fund the legislature, they give money to the national assembly, everybody begins to complain. if you are building a house, you will allocate money to buy materials, pay labour and supervisors. You did not complain about the money allocated to others except that of the supervisor. If you cut the supervisor's money and money allocated to other areas will be wasted because of lack of supervision, have saved money? no. The proper thing is to give the supervisor money and insist that he should do the work well.

Nobody has ever engaged the national assembly to say what the constraints are. Because if national assembly does its work properly, the country will move forward. Nobody will be able to shy away from what they need to do. But if you don't support the National Assembly, if we open our mouth, they will say oh senators took money , nobody ask how much a minister took or is taking, Nigerians need to be educated about the roles of the legislature. And they actually needs to support the legislature. We are not getting that support and we need that support to function. Without that support, you compel the legislature to run to the executive for protection. If you do that you lose.

Removal of fuel subsidy
All this issue of subsidy is overblown. We were all here in this country when they told us that if they create television and radio stations Nigeria will scatter. The country will collapse. Today, there are private radio and television stations , very successful in that regard. They are giving voice to the voiceless, millions of Nigerians have jobs working in these private stations. And Nigeria is still here.

If you go to Ghana, there is no subsidy. They are doing business. They are living . We need to actually focus on what is important. We have this culture that everything is being shared; everything must be shared. Anything that looks as something is affecting your share, you go to war.   Fossil fuel is a generational wealth. It is created from the bones of our ancestors. Is it right for one generation to take that resources, use it to buy petrol, shoes, for payment of their own salaries and go. What of future generation? This is a generational wealth; it doesn't belong to any one generation. What is our contribution? What are we creating? How are we paying our own bills. If we take oil money and pay our recurrent and die off, what happens to the children who are coming?

If you look at England, England was a very small country but with the opportunity they had they created an infrastructural base in maritime, conquered the world and created a financial base for their country that has outlasted all those other opportunities. They could have eaten all those things that time and left the place derelict and these other children would be like us struggling the way we are struggling. But their fathers didn't do that.

The whole conversation about fuel subsidy to me is overblown .

We need to actually look at what direction this country is heading toward. This is not a productive society. We are not producing anything. We are not creating wealth, we are sharing everything. Every position is being given to people on the basis of what to share. Anything that will affect sharing is qoutarized and becomes a problem. How can you grow a country like that? And nobody is concerned about it.