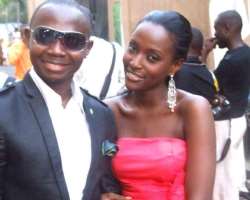 It was a day of fun, conviviality and career development opportunity for secondary school students and other guests that attended this year's edition of Career Day Celebration, put together by ACCA, Nigeria as part of its Corporate Social Responsibility programme in the country.
Top among career talk experts and professionals who have made success in their chosen careers, invited for the occasion, was the young and affable Nigerian stand up comedian, Mr. Teju Oyelakin otherwise known as Teju Babyface.

According to the petite comedian, the early fame that his comedy and acting talent brought on him nearly ruined him. “I started making more money from the small shows and events where I performed and that got into my head.

I lost focus, especially in my year one at the University of Lagos. I chose to come to class when I liked, I was just enjoying myself with girls around me. I was studying insurance, and forgot it was a very serious course that only serious students can pass.

I became serious when my classmates left me behind to grapple with extra year.”
Teju, who described himself as an entertainer, admonished parents and guardians who often insisted on choosing career choices for their wards. According to him, such act nearly ruined his academic career at the university.

“While I was in secondary school, preparatory to my university admission, my dad, brother, and other family members were busy selecting courses for me to read at the university, when they didn't know which subjects I was good at and which one I was deficient in.

At the end, I had to focus on the subjects that I knew I could do well in. For your information, I was and still the only student that ever made A1 in literature in my secondary school. I will therefore advise that you should be focused, read your books. Don't join cultism in school, don't follow crowd, and ensure you discover your inner strength. I am a successful comedian today because I discovered that talent in me early, and I concentrated and built myself up in it.

Even though my course of study at the university was insurance, I would rather concentrate on the artiste in me.

However, if there is anyone of you who will like to become an entertainer or comedian, I will advise you to first of all, get your academic degree, because without it, your talent would not take you anywhere. Education is the most important foundation for any youth to be successful in life”, Babyface concluded.