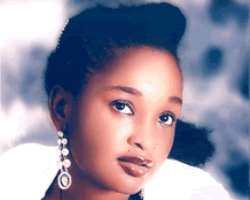 Following her befool in the last edition of the Next Movie Star, the TV reality show, for wannabe stars in Nollywood, Boma Iwowari's career is currently enjoying an upward swing. The voluptuous thespian that has also done Nigeria proud on Tinsel, the Mnet sponsored series on Dstv, is also an emerging model, with several beautiful works to her credit.

The final year student of Business Administration at the Olabisi Onabanjo University, Ogun State, is currently engrossed on locations lensing a brand new soap, with youthful director, Chima Okoroji. When completed, the production would surely catapult the promising career of Rivers State born miss Iwowari, the last girl in a family of three lovely sisters, to the next level.

Iwowari Boma Chantel is a young, nice and very focused young lady. I'm from Okrika, Rivers State and a final year student of the Olabisi Onabanjo University, Ogun State, studying Business Administration.
I'm the last in a family of three lovely girls. I grew up in Lagos and Port Harcourt, Rivers State respectively.

What brought about your passion for acting and how did you come into it?

My passion for acting and showbiz in general, started when I was 16, in fact, I started as an usher. I eventually came into acting through soap operas and my first was Silhouette, from the stable of A2Z production, in 2007. I later featured in Tinsel, courtesy of Mnet, on DSTV. Its still running but my scenes are over. I was among the house mates of the recently concluded fourth edition of the Next Movie Star reality TV show that held this 2009. I lasted two weeks in the house before being evicted.

How did you become a member of this year's edition?

I got the info through a very good friend of mine and eventually got the form, after which I went for the zonal audition and was picked. It was tough but because I was determined, I kept scaling all the hurdles; I eventually made it to the house alongside other good and lucky housemates. If truth must be told, making it to the house was rigorous and tasking, but thank God for the grace to scale through.

It was fun, memorable, tasking and tough, but above all, we were able to learn a lot, especially about acting and life generally. Mind you, nothing good comes easy and we learnt that in the house. I do not think I can ever forget all the good things I learnt in the house. I had my ups and downs in the house with some of the housemates, because we all came from different backgrounds and cultures. This aspect made it difficult for me staying in the house, because most of them came to the house with their characters and style, but I had to live and cope with it throughout my stay.

Did you feel bad and cry when you were evicted from the house?

I felt really bad and cried bitterly when I was evicted because I never thought I would leave at that stage. 16 of us made it to the house and I was evicted from the second batch.

What was there reason for evicting you?

They said I was too gentle and always keeping to myself. Surprisingly, I won't say I'm an introvert; I'm both an introvert and extrovert, depending on my mood.

While in the house, did you think you were going to win?

Sincerely, I did not go to the house to win, I only went to the house to learn and I stayed longer at the academy. It was not about winning but what you have inside of you and what you can deliver to the world. I went with the mindset of if I win fine, if I don't, no hard feelings.

Oyinda, the eventual winner, do you think she deserved the crown?

Yeah, she truly deserves the crown. But while at the house, initially, I thought Uche or Anda, the guy from Ghana would win.

What would you say was the biggest lesson learnt from the house?

For me, the biggest lesson learnt from the house was being able to live happily and peacefully with people from all backgrounds. It was not easy doing this, but it has helped to make me a better person, more mature and courageous.

Among these people, you'd definitely find the annoying ones, the pessimists and the okay ones, if at the end of the day, you do not allow them to discourage or make you derail, you'd surely be a better person. I came in contact with many characters in the house. We had housemates from Nigeria, Ghana, Sierra Leone and Liberia.

You are currently on set lensing with dynamic director, Chima Okoroji, how did your path cross?

Our path crossed when he directed one of the tasks we were given in the house that was how we met. Ever since, its been fun knowing and working with him. He's one director that gives you a chance to prove yourself, no matter the situation. He's a great director and we all love and appreciate him for his humility.

We would like to know more about the job you are currently working on with him?

We are currently shooting a soap tentatively entitled: Lost Soul, I'm playing the role of Mabel, a frustrated girlfriend of an unrepentant gigolo who is also in love with a sugar mummy.
And I must confess, I have been coping very well with that role on set, all thanks to the organizers of the Next Movie Star, they thought me how to read and immediately interpret and understand my scripts in a jiffy. In essence, I'm proud of myself as a rising actress, especially on this set.

But in a real life situation, would you allow your guy to date you alongside a sugar mummy?

Hell no! No way!! It can never happen to me.

Do you have a guy in your life currently?

Of course, I do, he's my first love and we look forward to settling down as husband and wife someday soon.

Is he in support of your career as an actress?

Yes, he's very much in support of it, we are both undergraduates and very fond of each other. Let me also say it here that it has not been easy coping and combining my professional career with my studies on campus. But with the support and strength from God and my loved ones, I have been coping very well. The encouragement and support from my parents, especially my dad, has really kept me going and I pray never to let them down.

Who are the Nollywood stars that really inspired your going into acting in Nollywood?

First on the list is Omotola Jalade – Ekeinde, Joke Silva and Liz Benson. Unfortunately, I have not been opportune to meet or work with any of them. I cannot wait to do that whenever the opportunity comes.

As a rising model too, what kind of jobs have you done?

I'm more into photo modeling and have done quite a few. I hope to do more, because I started first as a model before veering into acting. Despite the fact that I started modeling first, acting has always been my first love. Acting gives me the courage to move on.

As a rising actress, what would you say are the major challenges you have been trying to overcome since you came in?

There are lots of challenges, but for me, the first, which is also very painful, is the fact that when you meet some people in the industry for the second time, they don't seem to remember you again. You will now have to begin another process of introduction.

Another is spending so much money, time, energy and even being exposed to risks, shuttling between my school in Ogun State and Lagos, in search of jobs, that most times, don't come. I've also come to discover that most times, roles are not given on merit, rather on man-know-man level. For me, that is not good enough, roles should be given on merit and talent. All these anomalies, most times, weigh me down.

But because of my passion for acting, I have vowed never to quit. It's bright for me up there and I know that I will make it. Deep down, I know that I have what the industry truly wants, which is talent, poise and panache. Other things that stand me out are: my unique name, face, diction and acting skills.

What is the method you've been using to wade of men and their advances?

I play my cards well, because they come after me always. I don't allow them take advantage of me, because I want something from them and at the same time, I make them do my biddings. My dream is to be a household name within and outside Nigeria soon that is why I'm extremely passionate and serious within my career.

Your physique, do you see it as an advantage or disadvantage?

Sincerely, I see it as a very big advantage, because it reminds me of both queens Latifah and Monique, it's a huge plus for me.

Deep down, do you think filmmakers are doing enough to help grow and groom the careers of up and coming acts like you?

I will say they are not. They should assist us by first and foremost, believing in us and giving us challenging roles, not the minor ones. Some of us are capable and very passionate with acting.

You look so cheerful and have a likeable mien, what makes you cry or probably weights you down?

I always try to be happy and cheerful, but I get weighed down whenever I'm denied what is rightfully mine, especially movie roles.

What part of your body do you think attracts men to you the most?

Most of them easily get attracted by my face, smile and body structure.

Sola Fasobi, the producer of Next Movie Star, did he fulfill all the promises he made to you housemates?

Yes, as a gentleman, he did fulfill all he promises he made to us. In fact if I'm given a second chance, I would like to go back to the house, based on how good they treated and groomed us. I fell ill when I left the house, because of how we bonded. I want to go back to that wonderful house.

What do you love most about being in Nollywood?

I would say the fact that one is able to impact positively on the larger society through acting, thereby further helping to change the society. We can all make the world a better place, only if we try.