See What Marriage Has Done To Bovi! 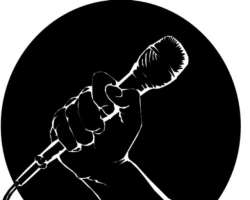 MULTI-TALENTED comedian and actor, Bovi, was a thin man when he finished school and became a comedian. Even as he climbed to become one of the nation's best at the moment, he remained thin. Then suddenly, he took a wise decision to get married (his detractors said he was making too much money) some months ago. T4T did not nearly recognise Bovi when he walked into the popular hangout at the National Stadium on Sunday; some minutes after unpatriotic Emeka Enyiocha came in. His face is getting fuller. He was looking like one who just left the fattening room without completing his course. On enquiry from some of his detractors, they claimed marriage was responsible for his present robust state.

Very good Bovi, but remember you are just some few months into the life race of marriage, naim you be like dis so? Wetin dem Ali Baba, Okey Bakassi and other comedians wey don marry since for don be na. Advice. Remember the advice wey dem giv Thunder Balogun: 'Remember your left.'