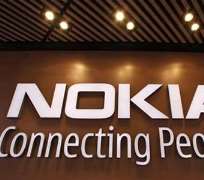 Struggling phone maker Nokia Oyj basked in brightening prospects for its much-hyped Windows phone on Thursday as it prepared to strengthen the hand of new boss Stephen Elop by replacing its old-guard chairman.

Shares in the Finnish company, which has been losing ground to rivals in the fast moving market for "smart" mobile phones, topped the gainers board in the FTSEurofirst 300 index, climbing 5.3 percent to 4.09 euros by 1211 GMT.

A number of broker upgrades cited brightening prospects for the operating software tie-up with Microsoft it gambled its future on last year.

Credit Suisse upgraded the stock to "outperform" from "underperform" on hopes of smartphone recovery.

"We fundamentally believe that Nokia's focus on Windows will allow the company to drive a recovery through 2012 in both its top-line and earnings," analyst Kulbinder Garcha said in a note.

"The market has been worrying over Nokia Windows Phone deliveries in the fourth quarter. Compal's strong comments relieve some of these worries," said Pohjola Bank analyst Hannu Rauhala.

WHO IS NEW CHAIRMAN?
The upgrades and the stock price rise came as a Finnish newspaper Helsingin Sanomat reported the board would propose Risto Siilasmaa as its next chairman to replace long-time leader, Jorma Ollila, who is due to step down in May.

Siilasmaa, a 45-year old entrepreneur, has been a Nokia board member since 2008 and is known in Finland as the founder of software security company F-Secure. He also chairs the board of Finnish telecom operator Elisa, but is little known outside the country.

The appointment of Siilasmaa, who is relatively unknown outside Finnish borders, could indicates that Nokia has struggled to find a big hitter for the role, analysts said, although they said it also underlines Elop's determination to turn the company around.

Ollila, 61, led Nokia's transformation from a rubber boots and TVs conglomerate into a giant mobile phone company in the 1990s, but in recent years the company has lost out to newcomers Apple and Google in the smartphone market.

Elop, the first non-Finn to run the company, has overseen a halving of Nokia's share price since the group dumped its own smartphone software platforms 11 months ago in favor of Microsoft Corp's Windows Phone.