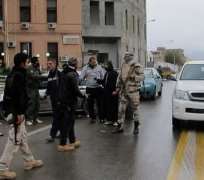 Libya risks sliding into civil war unless it brings under control the rival militias which filled the vacuum left by Muammar Gaddafi's downfall, the head of the interim administration said after an outbreak of violence in the capital.

Mustafa Abdel Jalil, chairman of the National Transitional Council (NTC), issued the stark warning in response to a gun battle between militias in one of Tripoli's busiest streets which killed four fighters.

More than two months after anti-Gaddafi fighters captured and killed the former dictator, Libya's new rulers still struggle to exert their authority as rival militia leaders refuse to cede control of their fighters and hand in their arms.

"We are now between two bitter options," Abdel Jalil told a gathering in the eastern city of Benghazi late on Tuesday.

"We deal with these violations (clashes between militias) strictly and put the Libyans in a military confrontation which we don't accept, or we split and there will be a civil war."

"If there's no security, there will be no law, no development and no elections," he said. "People are taking the law into their own hands."

The militias, drawn from dozens of different towns and ideological camps, led the nine-month fight, backed by NATO air strikes, to end Gaddafi's 42-year rule. Now though, they are reluctant to disband and lay down their arms.

They are vying with each other for influence in the new Libya, and believe that to ensure they receive their share of political power they need to keep an armed presence in the capital.

The NTC has begun steps to create a fully functioning army and police force which will take over the task of providing security in Libya from the militias. Abdel Jalil acknowledged though that progress has been too slow.

"We have no security because the fighters have not handed their weapons despite the chances they've been given to do so through local councils," he said. "The response has been weak so far, people are still holding on to their weapons."