2013: MIMIKO NOT UNDER PRESSURE -COMMISSIONER 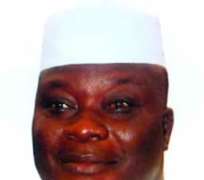 •Faboyede
As the election year of 2013 draws near in Ondo state, Commissioner for Community Development and Cooperative Services, Clement Faboyede said Governor Olusegun Mimiko is not under pressure over the coming election.

In an interview with RAZAQ BAMIDELE in Akure, Faboyede, who expressed confidence that the governor would coast home victory wondered if there is any opposition in the state, stating that opposition in Ondo exists only on the pages of newspapers without visible structure on ground.

You will agree with me that from the onset of this administration, Mr. Governor created the Ministry of Community Development and Cooperative Services for the first time in 36 years. And the aim was to carry home the promises during the campaign about his agenda. He promised during the campaign that he was going to change the life of his people from darkness to light by providing enabling infrastructure that would be seen as a communal set up. He started with what we call community survey. After that we now moved into the communities to spread the information. The enlightenment was led by me as the Commissioner for Community Development and Cooperative Services. We called that pre-entry days. During that period, we introduced the Community Change Agents who are young volunteers and young graduates that were so trained to interact with all the strata of human endeavour to get the best out of them about economy, education, health and infrastructure. And at the end of the day, they prioritise their need and then government moves in to build the most urgently needed ones.

And we are doing this to recoup confidence from the governed to the government. In time past, there were a lot of campaign promises that were not fulfilled. And the people being governed lost confidence in their government. And that is the first essence of our first 'I' in our three 'I's initiatives acronyms of transformation.

Then secondly, if we put the infrastructure in place, who maintains them?

We then ask the communities to give us four people each, who we brought to Akure where we organised a workshop for them on data analysis, data processing, project conviction, project execution, how to bring the people together to raise funds, how to start projects and how to analyse those projects, how to beckon to government for a helping hand. We did that one on 17th of May, 2010.

Today, one and a half year after, a caring government, is now savouring the fruit of that labour. In 17 communities, 80 pilot schemes scaled through the criteria set out for them for government to intervene. These are the communities that must have completed and concluded and put in good use, all the infrastructure put in place within their own communities.

The trained Community Change Agents are now working. They have raised funds to execute projects. And now is the time for the government to move in to evaluate and give them the 80 percent of what remains for them to complete the projects.

In the previous governments, grants used to be N25,000 or N10,000 which always ended in buying meat for the cooking pots of the community leaders. But today, the least is N2.1m. The amount is good enough for that community to complete its projects. It is paradigm shift from what was happening in the past. Mr. Governor believes that, when you want to do anything, you do it well, do it to a logical conclusion and to fruition. So, we thank God that, in Ondo today, we are witnessing a paradigm shift, purposeful and meaningful, the first in Africa. It is a challenge which I want other governments to contradict.

Election gimmicks
It is not because election is coming. When Mr. Governor was sworn-in in February, 2008, he created our Ministry in April of the same year and gave us all these agenda we are prosecuting. It was never for any election purpose. The man is focussed because he knew he would become governor. He has had his caring heart agenda. He gave us all this clues of transformation. So, it is already embedded in the system.

I will tell you that the next step is creating wealth through micro industries using homogeneity of raw materials which abound in our state. We have our own sustainable program. Glory be to God.

I agree these programmes will have positive impact on the elections because people are now involved in governance. Peoples integrity have hyped up. People now have sense of belonging that they are part of development in their own communities. It has not been done by any government. We have given grants to 17 communities out of 305. And Mr. governor has promised to touch the rest. Don't you think the rest of the communities would not vote for him? They will vote for him because they want their own share of the projects too. Already, they are engrossed in the system because they know it is a fruitful exercise. So, because they know that this governor has an unquenchable passion for development, and that he doesn't lie, they will vote for him.

Mimiko under pressure?
He is not under any pressure at all. What type of pressure? Thank God you are here today, you saw all the Obas, the community leaders, the youth, the students, market men and women. Although the programme is for only 17 communities, almost all the Obas in this state were there present watching the procedure with the aim of going back home to get ready for their own turn. They are happy.

All those that are making noise, only exist on television and radio. We are physical human beings on ground. We are all in the wards, we are in all the hamlets and villages. Seeing is believing. Go to all the communities and see development in those hitherto neglected areas. The antics before was government boasting of three or four projects in three years. But Dr. Olusegun Mimiko, a trail blazer has executed uncountable projects across 305 communities within just a spate of two or there years.

In comparative analysis of development, go to Osun, Edo, Ekiti, Ogun and Oyo states, even Lagos state and see who is doing what Mimiko is doing in Ondo state. In capacity building and investing in human beings, you will agree with me that it is not the political nomenclature that maters, but democratic dividends to the masses.