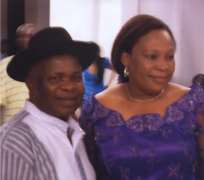 With the news of another Nigerian Ambassador involved in financial scandals and abuse of office, this reporter tried to contact the Ministry of Foreign Affairs in Abuja for clarification on the various allegations made against the person of Ambassador Felix Oboro to find out the situation of things and why no action is being taken on the matter yet.

The usual shift game was played out on the phone with this reporter as top officials in the Ministry declined to comment on the matter or referred this reporter to another person authorized to speak on behalf of the Ministry. Obviously the Minister of Foreign Affairs could not be reached for comment on this matter. However following the lead by the Will online newspaper; this reporter learnt through a source from Bayelsa State that the Ambassador's ordeal may be the work of his detractors in politics who wants him out of the way for someone else capable in the State to be appointed as Ambassador.

The source confirmed to me that there is displeasure from several quarters both in the political circle and the Ministry of Foreign Affairs on the list recently submitted by the President to the National Assembly for consideration for appointment or re-appointment as Nigeria's Ambassador. According to this source, on the list of names of questionable character including the name of Ambassador Felix Oboro who unfortunately is representing the birth place of President Goodluck Jonathan.

This reporter has obtained further receipts from Abuja of questionable financial transactions at the Embassy in Caracas. One of such documents show a letter dated February 24th 2011 where the Ambassador confirmed to JP Morgan Chase Bank, United Nations Plaza New York that the Mission did bought a Jeep Vehicle worth US$100,000 (one hundred thousand US dollars). The money was withdrawn from the Embassy bank account in October 2009, but no Vehicle was bought by the Mission till date. The said Jeep purchased was shipped to Nigeria by Ambassador Felix Oboro. So the question is where is the Jeep purchased for the mission?

Another allegation on financial spending is the money withdrawn from the Nigeria Embassy account to finance medical bills of his step son. Abuja was duly informed by various sources, nothing has been done. The said medical expenses treatment for his step-son in Venezuela, $75,000.00 (Seventy five thousand US dollars) has no approval from the Foreign Affairs Ministry. However, those who did similar in the past were sanctioned by the same Ministry.

This reporter was informed in Abuja that Ambassador Oboro is at logger head with his senior Embassy staff because of unexplainable and unaccountable hospitability allowance spending of the Ambassador; between July–August 2008, the expenses were incurred long before the diplomat resumed duties in Caracas. The total amount he spent was $286,541. This amount was spent on entertainment by an Ambassador who is always in Nigeria to implement the Foreign Policy of the country. Also, this reporter was informed that the Ambassador was withdrawing the salary of eight domestic staff which is against four domestic staff approved for him in his letter of Appointment.

The said Ambassador is alleged to publicly declare his resentment at working with Igbos or Yorubas in the mission despite him having an Igbo name, 'Okoro'. So when the Head of Chancery, a Yoruba man was posted to the mission over a year ago; Ambassador Oboro openly demonstrated that he cannot work with him thereby bye passing him on matters of national interest to do it his own way.

Also in the possession of the foreign Ministry are petition letters written against the person of the head of Chancery; in those mails, the Ambassador through Nigerians had requested that the diplomat should be withdrawn from the mission in Caracas. His offense – he is a Yoruba man and nosing into the affairs of how money is spent in the mission.

Is this the task of an Ambassador to select whom he or she can walk with in the mission? As for his deep hatred to the lbos, Ndigbo Associations should not take it lightly while the Yoruba Associations like Afenifere and Odua People's Congress (OPC) should analyze whether it is his personal policy or that of a represented interest not to want to work with certain people of different tribe from his?

The Nigerianvoice.com is also informed that the visit of an Inspection Team to the Mission from Abuja created panic and to cover up the financial scandals, the Ambassador instigated Mr. Victor Anamelechi led Nigerian Welfare Association to violently storm the Embassy to disrupt the visit and to demand for their e-passports fee back. According to the Foreign Ministry source the e-passports fee has twice been paid for in 2008 and in early months of 2011. The leader of the Inspection Team and the number two man in the Mission narrowly escaped death during the attack..

According to the source, the foreign ministry has the report of the inspection team and what took place at the mission during their visit but the Ministry is not doing anything on the report.

According to the source, the Ambassador should clear his name on the allegations leveled against him before the Foreign Ministry and once there is no truth in the matter, he would be free to continue his work. Until that is done, the matter is under investigation.

We threat every accusation seriously particularly when it involves threat to lives. Ambassador Oboro is accused that he gave authorization to the demonstrators to kill the leader of the Inspection team, kill the number two man in the Embassy and wound the female Accountant because they are Yoruba's disturbing him.

Through our source, the Nigerianvoice.com is informed that the demonstrators repeated their visit to the Embassy on the 12th December 2011 to hold the number two man to ransom. He was however able to explain the true picture of the situation, which made the demonstrators to start to spill the beans on how Ambassador Oboro, the Consular officer and Mr. Joshua Jock a local staff who was with him when he was detained and searched at the Venezuelan Airport.

Foreign Affairs Ministry was informed of all these developments. It is now left to the Honourable Minister to investigate the truth in the matter and take appropriate actions on the guilty parties to save Nigeria from further embarrassment in Venezuela. Meanwhile, the Federal government should urgently look into the issue of e-passports paid twice by Nigerians in Venezuela. It should also clear the issue of the Venezuelan ordinary passport No: D0395896 fraudulently obtained by the Ambassador for his grand child to protect the image of this government.