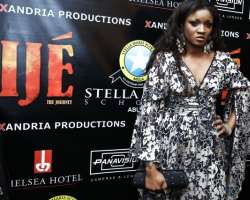 For the VIP screening for upcoming international feature film, “IJE: The Journey” on Saturday November 14th 2009 at the Warner Brothers Studio in Burbank, CA, a-lister's showed up to get a sneak peak of a movie that will undoubtedly merge the Nollywood and Hollywood entertainment industries. The movie stars Nigeria's top actresses Genevieve Nnaji and Omotola Ekeinde-Jalade, as well as Hispanic sensation Odalys Garcia and upcoming heartthrob Ulrich Que. Directed by Chineze Anyaene and produced by Chineze Anyaene and Paula Moreno, IJE commands the international and American fan base as it is diverse and appeals across age, race, and gender lines. The movie has a riveting film score and boasts of excellence in cinematography and editing. Its compelling story captured the audience's attention from start to finish.

Xandria Productions invited an exclusive group for a V.I.P. screening of IJE the Journey. It was a packed house as more than 200 guests filled the studio at capacity with the director, producers, and cast members in attendance; Representatives from the office of the Mayor of Los Angeles Antonio Villaraigosa, the Vice President of the Grammy Awards, Nigeria's own Prince Malik Ado Ibrahim, Richard Elfman (Forbidden Zone, Bone Chillers) Hollywood actors Hakeem K. Kazim (The Fourth Kind , Hotel Rwanda , 24), Razaaq Adoti (Resident Evil: Apocalypse, Amistad), Sammi Rotibi (CSI: NY, NYPD Blue) and Hope Olaide Wilson (Tyler Perry's I Can Do Bad All by Myself) made appearances as well. Film industry representatives, ditributors, and media folks rounded out the guests, who finished trickling in at around 7:30pm. A reception at Warner Brothers immediately followed the screening. Producer Paula Moreno was smiling from ear to ear as she greeted guests. “It is a immense honor to have Nigerian talent in this film such as Omotola, Genevieve and Director/Producer Chineze,” she said “These women are the epitome of Nollywood and it has been a pleasure working with them.”

Nollywood and Hollywood are known for their glamorous red carpet movie premieres, and though this all exclusive VIP screening was an entirely different private experience, it generated a considerable amount of buzz in both industries. “We are extremely thrilled about the completion of IJE and wanted to have an event that would enable us to share our journey with the entertainment community," said Director and producer Chineze Anyaene, who is now gearing up for the official premiere, which will include the traditional red carpet and press line. When asked about a trailer, Anyaene reassured fans that a theatrical trailer would be released very soon. “Stay tuned,” she promised “we have great things in store for you all.”