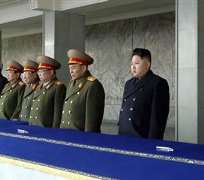 North Korea announced on Saturday it has appointed Kim Jong-un, the anointed successor and youngest son of Kim Jong-il, as supreme commander of its 1.2 million-strong military, two days after official mourning for the late leader ended.

The North's state news agency KCNA said the appointment was made at a meeting of the Political Bureau of the Central Committee of the ruling Workers' Party on Friday.

KCNA said the Political Bureau members "courteously proclaimed the dear comrade Kim Jong-un, vice-chairman of the Central Military Commission of the Workers' Party of Korea, assumed the supreme commandership of the Korean People's Army," according to a will made by Kim Jong-il on October 8.

It did not elaborate on the will.
Since Kim Jong-il's death on December 17, the North's state media have dubbed Kim Jong-un "supreme commander." Some Korea-watchers say it may take Kim Jong-un some months to assume the full panoply of official titles held by his father.

But the announcement of the politburo's decision not only meant official approval of his control of one of the world's most powerful armed forces but also indicated the consolidation of his power could be much faster than expected.

Footage aired recently by the North's state TV has shown Kim Jong-un, believed to be in his 20s, flanked or followed by the North's top military officers and a coterie of leaders during a series of mourning ceremonies for his father.

This signaled a smooth transfer of power to Kim Jong-un, the third generation of his family to rule the unpredictable and reclusive communist state since shortly after World War Two.

"Faced with the sudden death of his father, Kim Jong-un and his supporters, who appear to be less prepared and insecure, may think they do not have much time in solidifying the young Kim's position," Professor Koh Yu-hwan, an expert on the North's leadership from Seoul's Dongguk University, told Reuters.

"The approval (of his supreme leadership of the military) should be one of the fastest ways to allow him the sovereign ruler position," Koh said. This ties in with the North's "military-first" policies on which Kim Jong-il relied heavily.

Kim Jong-un was named a four-star general and given the vice-chairmanship of the ruling party's Central Military Commission by his father in 2010.

Many Korea-watchers also expect the inexperienced new leader, who had only been groomed for rule since 2009, to lead with the aid of a close coterie around him that includes his uncle and key power-broker, Jang Song-thaek, at least in the early stages of the power transition.

Despite Pyongyang's determination to project an unbroken line from Kim Jong-un's iron-fisted predecessors, which began with his grandfather, Kim Il-sung, there have been questions among outsiders about his capacity to lead the country.

North Korea, whose military is pursuing a nuclear arms program, is technically still at war with the South and is suffering from chronic food shortages.

Labeling its opponents "foolish," North Korea warned the South on Friday it would stick to its hardline policies and said

Pyongyang would never engage with the current government of South Korea.