NIGERIA: THE BAYELSANISATION OF STATE POWER 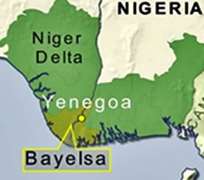 The self acclaimed Niger Delta leader Chief Edwin Clark was recently quoted to have said that- "when Obasanjo was in power Yoruba was the lingua franca in Aso Rock, that when it was the time of Yar Adua, it was hausa and that nobody should therefore complain if the ijaw language or the Niger Delta hat became the dominant headgear in the seat of power under President Jonathan”. This is the crude rationalization that the ijaw leader gave in response to allegation of the flagrant disrespect for the constitutional issue of federal character which the dominant party PDP recognized in its constitution as zoning principle. Jonathan will go down in history as one leader who promoted cronyism or nepotism as state policy more than all leaders before him in a democratic setting! .Many Nigerians who willingly supported President Jonathan on the principle of fairness and political equity are being told in plain language that they made a mistake going by this feeling of ‘’this is our own time’’ that are often exhibited by a few leaders of the Niger Delta. This of course glosses over the real issue of the "Bayelsanisation "of state power.

No doubt the Presidential System gives the President the wide powers to almost virtually appoint public officers at his pleasure but given the complex nature of our polity, political wisdom has dictated that our Presidents exercise this wide powers within the context of national unity and cohesion. The spirit of the constitution with respect to Federal character principle is to ensure that state power is not concentrated in few hands and that all segments of the country are represented in all arms of governments and all departments. Section 14 (3) of the 1999 Constitution as amended states” The composition of the Government of the Federation or any of its agencies and the conduct of its affairs shall be carried out in such a manner as to reflect the federal character of Nigeria and the need to promote national unity and also to command national loyalty ,thereby ensuring that there shall be no predominance of persons from few states or from a few ethnic or other sectional groups in that government or in any of its agencies’’. But with the advent of Jonathan Administration the Federal Character principles seems to have acquired a new dimension.

Let’s take some examples which in fact shows that even the Niger Delta itself can claim marginalization. The Presidency they often claimed to have been zoned to them has been utilized for plum appointments by only one state. Bayelsa, one of the smallest states in the country. The rule now seems to be that for one to be considered for any powerful appointment you must either be a Bayelsan by birth, or an inlaw of Bayelsa or must have worked during your career in Bayelsa .One way or the other trace your way to Bayelsa and pronto you find favour in the eyes of Mr. President,.

The Chief Executive of Nigeria today is from Bayelsa. The National Security Adviser who oversees all security organizations operationally in Nigeria and who by deeds and in fact is only answerable to President and his funding and budget is not subject to any legislative oversight or control is a Bayelsan. The most powerful Nigerian economically who controls the source of 80% of Nigerias wealth by law – Minister of Petroleum resources is a Bayelsan. For purposes of clarity the Petroleum Act gives more power in the control of our Petroleum to the Minister rather than the President and only in the allocation of Marginal fields is the Approval of the President required. So even though President appoints or removes the Minister, it is a fact that once appointed the Minister can confer instant wealth on any person without recourse to the President.

Lets look deeper into the security management of Nigeria under Jonathan. Apart from the NSA, the Chief security officer -CSO of the President is a Bayelsan. It is now in the public domain that the President in fact ordered the CSO to be promoted above his seniors in order for him to be qualified for the position. The IGP Alhaji Hafiz Ringim though from Kano was former Commissioner of Police in Bayelsa. The Director General of SSS though from Akwa Ibom was former Director SSS in Bayelsa. Also, the Minister of Police Affairs though from Ekiti was former Military Administrator in Bayelsa State. And the story is all around that Olubolade only represents Ekiti in name only as all around him is Bayelsa and it is easier to get Olubolade to do anything if a call is made from a Bayelsan. The joke now is that Olubolade is the second Minister of Bayelsa and for good measure, at the last bye election held in his domain in Ekiti for the House of Representatives, the Minister a PDP member lost his local government to the opposition party A C N while the PDP during the last Presidential election won by only one vote in his voting unit.

Perhaps these lopsided appointments would not have been a serious issue of concern but for the ineptness and lack of capacity that has been displayed in the security department of Government these past few months. Now people are wondering if this nepotistic selection method of the people managing our security apparatus is not already hurting the nation.

Now add this to the control of some other ‘’cash cow’’ departments of Government by either indigenes or in –laws of Bayelsa. Take NDDC, whose Chairman is from Bayelsa or NIMASA who is also a Bayelsan. For political correctness perhaps, the Senate then allocated the Chairmanship of the Upstream Petroleum committee to an indigene of Bayelsa! among others.

Now let us interrogate the past. Obasanjo who ruled from 1999-2007 perhaps overplaying the nationalist is generally now taking crude bashing form his people on account of ensuring that Yorubas were not unduly favoured in Nigeria’s governance or economic affairs. He was either surrounded by the Ibo mafia (Andy Uba, Soludo, Okonjo Iweala, Ezekwesilis etc) or the Hausa cabal (Aliko, late Waziri, El-Rufai, Ribadu, Muazu, Markafi etc). His NSA was Alhaji Gusau, from Zamfara, COS from Kwara, Minister of state Petroleum from Bayelsa, SSS Director General from and then later Col Are rtd from Ogun, Minister of Police affairs Plateau. He would sometimes remove his kinsman and replace with people from other areas as happened When Sanusi from Ondo state was removed and Soludo from Anambra was appointed as Governor of Central Bank of Nigeria.

Yar Adua his successor who was even accused of surrounding himself with Northern cabal did nothing close to Jonathan in entrenching his home state indigenes in all positions of state power even though a few of his’’ Katsina boys’’ wielded power on account of closeness to him particularly at the period of his illness. His NSA was Gusau and later Gen Zarki Murktar from Kano, COS from Delta state, CSO from Edo, Minister of Petroleum from Kaduna, NIMASA from Edo, IGP from Niger Delta. Never was all from Katsina or had to trace their relationship to Katsina. It was in public domain that the Niger Delta mafia led by IBORI wielded more state power from behind the scene in Yar Adua ‘s Government while it lasted.

Some commentators have tried to locate this undue Bayesalisation in the nature of the emergence of Jonathan and his own background .Having not really had much experience in national politics, Jonathan has little exposure to people outside his home state. His work experience was in OMPADEC Port Harcourt from where he went into politics to become Deputy Governor to Gov Alameiseigha, then Governor, Vice President and President in some quick succession giving not much room for gathering of a repertoire of political friendship. The sociological result of this gap in experience is the reliance on those he feels comfortable with from his home to run a complex country like Nigeria. Unfortunately this mode of governance always shortchanges the system that may never get the benefit of getting the best persons to assist in delivering good governance. But we are also by this putting our nationalism and constitutionalism to question. The lessons are dangerous for our future governance .Notwithstanding, the loud silence from the major ethic tribes particularly the Yorubas who have been marginalized in the present national governance should never be taken for cowardize .It’s a fact that today, no Yoruba can be found in nos1-10 in Federal Governance power hierarchy.

More worrisome should be that this kind of political behaviour can also be very infectious .Copy cats abound in our land who are adept at learning the bad things because it favours them. Take a look at Ekiti state under Fayemi, the Secretary to Government, Head of Service, two commissioners, three Special Advisers, the House of Representatives member and many others are all from his Local Government-Oye .This is an arrangement that had hitherto be unheard of in the state, critics say. There would be other example of bad learners all around!

The issue of Federal Character is key to the sustenance of our national unity and its implementation or lack of it has a way of bouncing back to haunt us. The wide acceptance of Jonathan Goodluck by Nigerians without any proper interrogation of his experience based on the circumstance of his emergence is a unique testimony to the unquestionable power of the Almighty God to create something from nothing or enthrone whoever he wishes irrespective of undeserving circumstances. Whoever is a beneficiary of God’s favour is however expected to be imbued with sufficient wisdom to recognize the salient virtues of respect for the intrinsic values that hold the nation together. As the holy Bible say, whoever lacks wisdom should ask of it from God. It is not too late to do so. The concept of Goodluckism should not be overstretched to becloud the sense of reasoning of Nigerian Leadership as to generate a negative ripple effect on the Nigerian polity now and in future

*Ade Akinmola is of the African Foundation for Democracy and Policy Initiative (AFDPI).