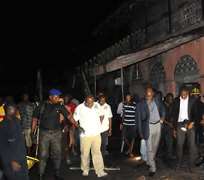 CALABAR, December 30, (THEWILL) - The nation’s oldest court that was hitherto the residential quarters to the Colonial Masters in Calabar, has been gutted by fire, damaging valuables in the main building which houses offices of judges and court hall.

An Eyewitness account said the fire which was caused by a power surge, started at about 1.00am Friday when a judge noticed a thick smoke coming out of one of the windows of one of the rooms which attracted security personnel’s from the neigbhouring government house.

The State Governor, Senator Liyel Imoke who was returning from a function at Tinapa, arrived the scene of the incident at about 4.30 am to commiserate the judges and staff of the court while commending men of the fire service for responding quickly to the inferno by preventing it from escalating to other buildings in the compound.

He expressed shock over the incident, which recorded loss of structure that would have served as a historical site, to tourists, and urged the staff to extend his sympathy to the President of the court.


As at press time, 90 percent of the building constructed with ancient materials over 100 years ago had been razed by the fire with the roof completely burnt.