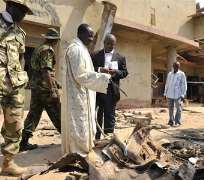 SAN FRANCISCO, December 29, (THEWILL) – The identities of some of those that died as a result of the Christmas Day bomb blast at St. Theresa Catholic Church, Madalla, was made public Thursday by the parish priest of the church, Reverend Father Isaac Achi.

Following the incident, the Catholic Bishop of Minna, Most Rev. Martin Uzokwu, who condemned the bombing, cancelled all midnight masses in Madalla and the entire Kwanmba deaconry only.

Bishop Uzochukwu announced the cancellation Thursday saying, “All parishes in Kwanmba deaconry, including Madalla will not hold night mass, in view of the times we are in.

“On December 31, mass should hold by 4pm to thank God for the out-going year and everybody will observe the pass over night with their families. We are to converge again for Sunday service on January 1st. No person is allowed to sleep in the church during this period.”

73 other persons wounded in the attack are being treated at about a dozen hospitals – the Specialist Hospital, Gwagwalada, General Hospital, and Suleja amongst others.

In a related development, President Goodluck Jonathan Thursday held a closed-door meeting with top security chiefs at the Presidential Villa, where he charged them to rejig their strategy and find the sponsors of Boko Haram.

Jonathan has been under intense pressure having been criticized by many Nigerians including opposition parties and activists, due to his perceived weakness in dealing with those alleged to be sponsors of the terrorist group.

After the meeting, Ringim told journalists that Jonathan "is concerned about the security challenges in the country, so he summoned each and every one of us, the service chiefs, in order to review the situation,” adding that “Terrorism is not an easy matter at all, it is a very new phenomenon here.

“We are all scrambling to find our feet and face it squarely," the Inspector General of Police added.