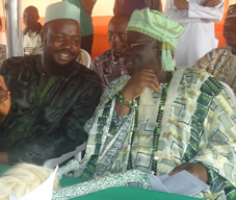 Photo:Sun News Publishing
More Sunlight of Islam Stories
One of the greatest misconceptions against the blessed Prophet Muhammad is that he was a murderer and an evil man. Indeed nothing can be farther than the truth. When one examines his life and the authentic sound hadiths, one will find out that the Prophet Muhammad was a great merciful man who never harmed innocent people. Here we shall post a couple of hadiths which show direct orders from the prophet that Muslims should not kill women and children, by doing so we shall refute many of the lies and distortions that have been thrown against the blessed prophet on supposedly being a cold hearted killer.

Chapter 2: APPOINTMENT OF THE LEADERS OF EXPEDITIONS BY THE IMAM AND HIS ADVICE TO THEM ON ETIQUETTES OF WAR AND RELATED MATTERS

Muslim Book 019, Number 4294:
It has been reported from Sulaiman b. Buraid through his father that when the Messenger of Allah (may peace be upon him) appointed anyone as leader of an army or detachment he would especially exhort him to fear Allah and to be good to the Muslims who were with him. He would say: Fight in the name of Allah and in the way of Allah. Fight against those who disbelieve in Allah. Make a holy war, do not embezzle the spoils; do not break your pledge; and do not mutilate (the dead) bodies; do not kill the children.

When you meet your enemies who are polytheists, invite them to three courses of action.

If they respond to any one of these, you also accept it and withhold yourself from doing them any harm. Invite them to (accept) Islam; if they respond to you, accept it from them and desist from fighting against them. Then invite them to migrate from their lands to the land of Muhajirs and inform them that, if they do so, they shall have all the privileges and obligations of the Muhajirs.

If they refuse to migrate, tell them that they will have the status of Bedouin and will be subjected to the Commands of Allah like other Muslims, but they will not get any share from the spoils of war or Fai' except when they actually fight with the Muslims (against the disbelievers). If they refuse to accept Islam, demand from them the Jizya (protection tax). If they agree to pay, accept it from them and hold off your hands.

When you besiege a fort and the besieged want you to let them out in accordance with Allah's Command, do not let them come out in accordance with His Command, but do so at your (own) command, for you do not know whether or not you will be able to carry out Allah's behest with regard to them. Here is one hadith of that shows us that before any expedition that was carried out by a Muslim, that the prophet would speak with the leader of the group commanding the leader to be just, and that the leader should NOT kill children.

Why would the prophet give such a command if he was an evil man like we were made to believe? Here are more hadiths from Bukhari's book that deal with this matter:

Bukhari Volume 004, Book 052, Hadith Number 257.
Narrated By 'Abdullah: During some of the Ghazawat of the Prophet a woman was found killed. Allah's Apostle disapproved the killing of women and children.

Finally, here is another hadith on this subject:
Maliks Muwatta Book 021, Hadith Number 010.
Section: Prohibition against Killing Women and Children in Military Expeditions.

Yahya related to me from Malik from Yahya ibn Said that Abu Bakr as-Siddiq was sending armies to ash-Sham. He went for a walk with Yazid ibn Abi Sufyan who was the commander of one of the battalions. It is claimed that Yazid said to Abu Bakr, 'Will you ride or shall I get down?' Abu Bakr said, 'I will not ride and you will not get down. I intend these steps of mine to be in the way of Allah.'

'I advise you ten things| Do not kill women or children or an aged, infirm person. Do not cut down fruit-bearing trees. Do not destroy an inhabited place. Do not slaughter sheep or camels except for food. Do not burn bees and do not scatter them. Do not steal from the booty, and do not be cowardly.'

Here is a hadith in which the first caliph of Islam was commanding a Muslim to not kill women or children, nor the elderly. The caliph was simply following the instructions that he had been given by none other than the prophet Muhammad.

In the light of the above there is no justification by anyone who claims to be a Muslim to kill the innocent, particularly women and children either during peace or war time.