SAME-SEX MARRIAGE IN NIGERIA: WHAT'S THE UPROAR ABOUT? 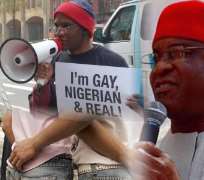 Towards the tail end of November 2011, the Nigerian Senate, under the leadership of Senator David Mark (PDP, Benue State), passed a legislation prohibiting same-sex marriage in Nigeria. No one knows if the other arm of the legislature, the House of Representatives, will go along. We also do not know if President Goodluck Jonathan will append his signature – or veto it. Nonetheless, the bill – and the prospect of the bill becoming a law – has ignited debates at home and abroad. This is not the first time such a matter has come up in our national conversation.


During the 14th International Conference on AIDS and STIs in (ICASA), held in Abuja in 2005, there were calls for the acceptance of same-sex marriage. Not too many Nigerians thought it was a good idea. In response, the Federal Executive Council, at the behest of President Olusegun Obasanjo, approved a law (Same Sex Marriage Prohibition Act 2006) which called for the imprisonment of anyone who Africa knowingly “performs, witnesses, aids, or abets” same-sex marriage.

Western nations are vehemently opposed to banning and criminalizig same-sex marriage. I am a supporter of gay right because of my liberal and progressive worldview. But more than that, I believe that homosexuals should have the same human rights and privileges as those of us who are heterosexuals. Why discriminate against a large portion of our community? Nonetheless, I do not think that the international community – even if they have noble motives – should openly and disrespectfully interfere in the debate as they have. Nigeria, after all, is not Uganda where gays are being beaten and killed (with the acquiescence of the government).

It is unwise for western nations – especially the United States, Canada, and Britain -- to threaten Nigeria with foreign aids and other sanctions. The best course of action would have been for these and other nations to privately discourage the bill, and or encourage the Nigerian legislative and executive branches to rethink the bill. To openly and aggressively interfere as they have is, to say the least, uncalled for. The West is so used to interfering in the affairs of developing countries that they sometimes do not know when to stop, or when to show respect.

Why do the US and other western countries criminalize and prosecute those who engage in plural (polygamous) marriages? This is a practice that is allowed, in one form or another, in many countries around the world. Yet, the west does not condone or promote it even though scientific studies have shown that humans are capable of loving and caring for more than one person at a time. Why not allow men to marry two or more women if they have the emotional and financial mean to do so (and if the women consent). One could argue that polygamy is “more decent” than same-sex.

The way the west has approached this issue hurts those of us (at home and abroad) who champions such causes. In matters of culture and long-held traditions and rituals, the west should show respect and restraint. We already have a continent where the people are gingerly accepting western democracy and its allied cultures and traditions. There is no need to shove the idea of same-sex marriage down the people’s throat. It makes good and common sense for the idea to germinate locally.

Same-sex marriage is not sinful. Marriage can be monogamous, polygynous, or even polyandrous in nature. As a social and legal institution that has marinated in several centuries of rituals, it has served and continues to serve many useful purposes. As a result, no amount of attack is likely to weaken its utility or foundation. And because the traditional-heterosexual marriage is well rested in our collected memory, it has been able to absorb and or make room for other subsets and subcultures, including levirate and sororate and the matriolocal and patrilocal living arrangements.

Marriage is marriage so long as it is between two consenting adults: participants’ gender should not be an issue. As an individual, you need not promote it or support it. That’s up to you. However, you must not attack those who support or promote it; and neither must you support those who call for its criminalization.

Across cultures and across geographical landscapes, marriage differs in structure, function, and meaning. Within the Islamic culture and religion, for instance, there is the Mut’a which, according to Shahnaz Khan, is a “system of temporary marriage which is rooted in pre-Islamic Arabia…A mut’a marriage may be based on either an oral or written contract…each individual contract determines how long the parties will remain married, which could range from one hour to 99 years. The religious and cultural purpose of mut’a marriage is sexual enjoyment for men and financial return for women...”

Are we to condemn and prosecute our Muslim brothers and sisters who joyfully practice Mut’a? No! And so I ask that you keep an open mind on same sex marriage.

Let me go on a limb here: but for culture, religion, and the forceful nature of parental and societal expectation, it is possible that a sizable number of Nigerians would not have bothered with marriage as we know it today. There are women and men out there who are suffering and dying under the weight of traditional-heterosexual marriage. They are suffering and dying in silence!

There are women who are forced to marry, forced to have sex, forced to have children, forced to be domestic slaves for egotistical men; and forced to endure all manner of abuse and exploitation -- all in the name of traditional-heterosexual marriage. The traditional-heterosexual marriage (with its subsets and subcultures) is not the only type of marriage out there. It should therefore not be forced on all Nigerians. To do so would be depriving many of their fundamental human right.

Marriage of any sort is optional, strictly voluntary. It is precisely because of its voluntary nature that no one has ever been prosecuted for being single, or for engaging in other forms of living arrangements. Why, then, must we criminalize and prosecute those who wish to engage in same-sex marriage? Same-sexers simply want the same right and privileges as their heterosexual counterparts. That’s all!

Written by Sabella Ogbobode Abidde, Comments and criticisms may be sent to: [email protected]