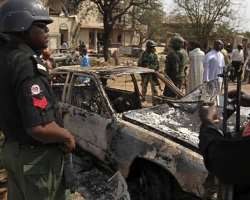 Attackers threw homemade explosives inside an Islamic school in a predominantly Christian city where some 50 children had gathered for an Arabic class, wounding six pupils and a teacher, authorities said Wednesday.

The rare attack in Nigeria's oil-rich southern delta comes just days after radical Islamist militants launched a series of explosions across the country on Christmas, leaving at least 39 dead and dozens wounded.

Analysts say it is too early to speak of retaliation following the attacks by Boko Haram, but worry about what such violence could mean. The school was attacked Tuesday in Sapele, Delta State police spokesman Charles Muka said.

"Sapele just seems like the most unlikely place for a retaliatory attack to take place," criminologist Innocent Chukwuma said. "But if it is, this would play right into Boko Haram, which has been looking to escalate the conflict to make the country ungovernable."

Nigeria, which is Africa's most populous nation, is largely divided into a Muslim north and Christian south, though members of the two faiths live everywhere across the country, do business together and intermarry.

Thousands, though, have died in recent years in communal fighting pitting machete-wielding neighbors against each other. Earlier this year, at least 800 were killed across Nigeria's north in postelection violence after a Christian candidate was elected president.

Authorities believe the attack in a village near the city of Jos was carried out by Muslim herdsmen.

Boko Haram has carried out increasingly sophisticated and bloody attacks in its campaign to implement strict Shariah law across Nigeria. The group, whose name means "Western education is sacrilege" in the local Hausa language, is responsible for at least 504 killings this year alone, according to an Associated Press count.

While initially targeting Islamic and Christian clerics, politicians, policemen and soldiers via hit-and-run assassinations from the back of motorbikes after the 2009 riot, violence by Boko Haram now has a new sophistication and apparent planning that includes high-profile attacks with greater casualties.