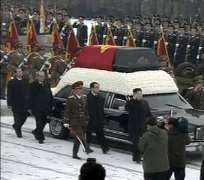 The world watched anxiously on Wednesday as North Korea staged a huge funeral in the capital, Pyongyang, for former leader Kim Jong-il, searching for signs of what to expect from the isolated nation that may be close to attaining nuclear weapons capacity.

Bleak pictures from state television showed a funeral cortege led by a limousine carrying a huge picture of the 69-year old, who died on December 17, passing serried ranks of olive green-clad soldiers whose bare heads were bowed in homage in the main square of the snow-covered capital.

A hearse carrying the coffin was led by a weeping Kim Jong-un, the son and heir, accompanied by Jang Song-thaek, his uncle and a key power-broker in the transition, and Ri Yong-ho, the army chief of staff.

"Seeing this white snow fall has made me think of the general's efforts and this brings tears to my eyes," Seo Ju-rim, a red-cheeked, weeping female soldier, told North Korean television, referring to Kim.

One of the myths surrounding Kim Jong-il was that he could control the weather and state media has reported unusually cold and wild weather accompanying his death.

Video showed weeping civilians who swayed with grief and shouted "father, father" as black Lincoln and Mercedes limousines and army trucks streamed past the crowds. It was not clear whether the pictures were live or recorded.

"I wished it was a dream, how can this be true," sobbed one middle-aged woman named Kim. "How can anything like this ever happen in the world?"

Kim Jong-un will become the third member of the family to run the unpredictable North Asian country as it enters 2012, the year that was supposed to mark its self-proclaimed transformation into a "strong and prosperous" nation.

Larry Niksch, who has tracked North Korea for the nonpartisan U.S. Congressional Research Service for 43 years, believes it could take as little as one to two years to have a working nuclear missile once the North produced enough highly enriched uranium for the warhead's core fuel.

The prospect of an untested leader, believed to be in his late 20s, having nuclear capacity has alarmed many.

"Yes, we are watching and will be analyzing how any changes can be reflected in our policy," a South Korean government official said. He was not authorized to speak to the media, so could not be identified.

UNCLE JANG, POWER BEHIND THE THRONE
State television showed Jang Song-thaek walking directly behind Kim Jong-un alongside the limousine carrying the coffin. Jang ranks a lowly 19th in the list of names on the state funeral committee but his public elevation confirms that he will play a key role in shaping policies.

An ascetic-looking, bespectacled 65-year-old, Jang has overcome a purge, bitter palace intrigue and personal tragedy to become vice chairman of the National Defense Commission, the supreme leadership council which Kim Jong-il led as head of the military state.

"Kim Jong-un is clearly the head of the new leadership but, in terms of hierarchy and influence, Jang appears to have secured considerable position," said Yoo Ho-yeol, a North Korea expert at Korea University in the south.

Strong it may be -- North Korea is backed by neighboring China, has conducted two nuclear tests and has a 1.2 million-strong armed forces -- but prosperous it is not.

On average, the 25 million North Koreans have a life expectancy three-and-a-half years lower than they did when "Eternal President" Kim Il-sung, the new leader's grandfather, died in 1994, according to U.N. data.

The United Nations, in a country program for 2011-15, says North Korea's main challenge is to "restore the economy to the level attained before 1990" and to alleviate food shortages for a third of its 25 million population.

Indications from the transition since Kim Jong-il's death suggest his "military first" policy will continue, leading to further hardship in a country that endured mass starvation in the 1990s.

Leverage from outside, with the exception of China, is limited. All the United States, South Korea and Japan can do is hope that the regime does not collapse, nor flex its military muscle as it did in 2010, when it shelled a South Korean island.

North Korea was established in 1948 and under its founding father, Kim Il-sung, went to war to try to conquer the South. It failed and in 1953 a dividing line that would become the world's most militarized frontier was drawn across the peninsula.

PROSPECTS OF A PURGE
While Kim Il-sung was revered by his people for fighting Japanese colonial rule, the halo surrounding his successors has steadily dimmed to such an extent that his grandson, the new ruler, will have to rely on people such as his uncle, Jang, to hold on to power, at least in the short term.

Official media in the North have built Kim Jong-un, a jowly and rotund man in his late 20s, into a leader worthy of inheriting the crown, naming him "respected general," "great successor," "outstanding leader" and "supreme commander."

This year, dissident groups based in South Korea, citing North Korean refugees and businessmen working in China, linked the youngest Kim to a crackdown on business activities and a tougher policy on people seeking to flee from North Korea.

Those reports could not be verified independently, but would again suggest that further repression is more likely than an economic opening under the new man.

It also gives little hope for the 200,000 North Koreans who human rights group Amnesty international says are enslaved in labor camps, subjected to torture and hunger or execution.

"There is likely to be a politically motivated purge and imprisonment, and it could go on for a considerable period of time," said Pak Sang-hak, who heads a group in Seoul working to support defectors, and is himself a defector.

"That is especially because of the relative instability of Kim Jong-un's leadership. There might also be persecution as a way of intimidation and discipline."