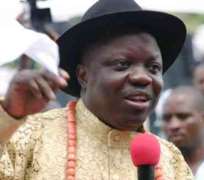 The embattled and self-exiled traditional ruler of Uzere kingdom, Isoko South local government area of Delta state, HRH Isaac Udogri 1, has again attracted the curses of his subjects for framing up some illustrious sons of the community following the bloody

crisis that rocked it which led to the untimely death of two youths and burning of his palace and other property.

It would be recalled that following what the youths and leadership of the kingdom described as refusal of SPDC to sign the Global Memorandum of Understanding (GMOU) entered into with the kingdom since 1958 sparked up a protest that turned bloody, resulting in the burning of the monarch's palace, his wife's provision store by the irate protesters and the killing of two indigenes by soldiers allegedly invited by the monarch.

A statement issued by the community's President General, Chief Emeakpo Owhe (JP) and made available to Huhuonline.com http://Huhuonline.com/ stated that 'It is a known fact that Uzere kingdom/land has been blessed with oil and gas in its land. It is also a known fact that SPDC took the advantage to exploit these natural resources on our fatherland for the past 52 years (1958 to date). Oil and Gas have continued to flow from the bowel of the land uninterrupted for over five decades with continues gas flaring, inflicting serious environmental hazard on the people and the land.'

According to the statement, the gas flaring has caused land degradation, deforestation, ecological destruction resulting in infertility of the land, poisoning and reduction of aquatic life as well as the pollution of the air and water which has caused several different diseases, including cancer, stroke.

'Consequent upon the above, we wrote shell since February 2011 to come to Uzere to discus and firm up and GMOU (Global Memorandum of Understanding) with Uzere Communities. In the month of October, we reminded SPDC on the imperative of putting a frame work in place of the (GMOU) so that we can legally know the basics of our relationship partnering and cooperation with SPDC.

'The ultimatum given to SPDC on the issue of GMOU with Uzere kingdom expired months ago. But up till now SPDC has not shown any interest to have a GMOU with Uzere kingdom, its host communities. Today we cannot boast of any Uzere son or daughter working in SPDC, from typist to other office staff. No graduate in SPDC from the kingdom, yet oil and gas is been removed daily from the land making the people dry economically.' adding that they have also written to Delta State Government on the refusal of SPDC sign the GMOU stressing that the crisis was never political.

Huhuonline.com findings revealed that after been rendered homeless by his community, the monarch who is a bona-fide member of the Peoples Democratic Party (PDP) allegedly framed up and petitioned some of his subjects, which include one Chief Iduh Amadhe, Delta state House of Assembly candidate of the Labour Party for Isoko South constituency II in the 2011 elections, Chief Emeakpor Owhe, President General  of Uzere, the community chairman and others whom he alleged are behind his predicament and wanted him dead.

It was reliably gathered that the monarch in collaboration with one Mr. Leo Okuweh Ogor, member representing Isoko federal constituency in the House of Representatives and deputy majority leader, Mr. Johnson Erijo, Delta state House of Assembly, representing Isoko South constituency II and deputy majority leader and Mr. Askia Ogieh, former chairman of Isoko South council amongst others who are members of the PDP allegedly connived with the police in Abuja to effect the further arrest of the Uzere citizens who are currently in detention.

The innocent suspects, according to community sources, who were whisked to the Luis Edet's House in Abuja since last week were denied bail despite their lawyers' readiness, following instructions given by the above actors in the arrest.

Investigations however revealed that the Labour Party candidate has been targeted by the PDP cabals due to his refusal to drop his appeal case at the Court of Appeal, Benin against the PDP House of Assembly member declared winner by the INEC.

The Labour Party candidate and other suspects who were charged to a Magistrate Court in Abuja after the court declined jurisdiction, were taken to an Abuja High Court but unfortunately the court was on vacation and they were returned to police custody before the IG directed that they be transfered to Zone 5, Benin city where they are currently been detained.

Impeccably sources confided in Huhuonline.com that the Labour Party candidate had been three months ago roped into a stage managed kidnapping of one Pa. Ogrih in Uzere kingdom by his son, one Mr. Sam Ogrih, member, Delta state House of Assembly Service Commission; Mr. Askia Ogieh, former Isoko South council boss, Mr. Johnson Erijo, member, House of Assembly and others before this current framing up by the same cabal all in a bid to frustrate him from pursuing his election case pending in the court.

Some indigenes of the community who pleaded for anonymity described the monarch as a greedy and self-centred king, saying that he 'Has amassed wealth for himself to the detriment of the community. He handles Shell contracts; he connives with Shell to commit evil against his own community all because of money. He is a politician and card carrying member of the PDP and he fights against anyone who dares vote and campaigns for any other party than PDP in the community. The crisis that rocked the community was caused by him and his cohorts because of his greediness and wickedness in the land.

'In 2011 elections he was given money by his party to fight against the members of other parties especially the labour party Assembly candidate. I want to tell the whole World that the crisis is not political but the monarch and his cohorts have turned it political where innocent people in the town are now been arrested unlawfully. This is the worst and shameful king this our kingdom has ever had in decades because we have never had a king turned contractor who strives in fighting against his subjects for political reasons best known to him.

'The painful thing is that when the crisis started Chief Iduh was not in town. For several months now he has not been in town because he is pursuing his election case at the Appeal court in Benin and it will be mere wickedness for anyone to robe him into what he knows nothing about. Even our community leaders arrested are been framed up too', they lamented.

Meanwhile the panel of inquiry set up by the Delta state government has not commenced sitting before the suspects were arrested in connection to the crisis which the entire people of the kingdom have condemned in strong terms.

As at the time of filing this report, the police hierarchy, it was gathered are dilly-dallying over the matter probably in a bid to frustrate the Labour Party candidate from concentrating on his election case pending at the appellate court in Benin.