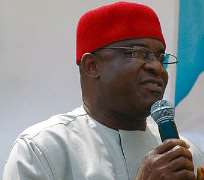 ABUJA, December 26, (THEWILL) - President of the Senate, Senator David Mark has described the Christmas Day church bombing in Madala, the bombing at the office of the State Security Services in Damaturu, Yobe State and other attacks as sacrilege and condemnable by any right thinking member of the society.

Senator Mark in a reaction to the heinous act said the unabating spate of bombings and violence in the north is a direct affront and a declaration of war against the citizens of Nigeria.

An angry President of the Senate said: "These spate of bombing and killing of innocent and harmless country men and women cannot be a way of life. This is not part of our culture or way of life. Leaders at all levels and across the divide must rise to this unwarranted affront against the people.

"Every leader worth his or her name must join the vanguard to preach the gospel of peace, love and reconciliation. God did not make mistake to keep us together as a people with common mission and destiny.

"Whatever the anger or misgivings, neither our laws nor the Holy books allows unlawful taking of another man's life. This is absurd and totally intolerable," he stated.

The President of the Senate heartily sympathized with the families of the victims of the bomb blasts, saying that government would ensure that they did not die in vain.

While urging the security operatives to redouble their efforts, to contain the situation, he promised that the Senate and indeed the national Assembly will collaborate with the executive arm of government to ensure security of lives and property across the country.

He specifically told religious extremists and terrorist organisations like the Boko Haram which has claiming responsibilities for the bombings and many other attacks to sheathe their swords and embrace peace in the interest of the corporate existence of Nigeria.