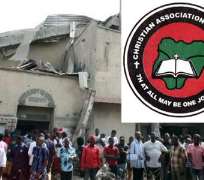 KADUNA, December 26, (THEWILL) – The Christian Association of Nigeria (CAN), Nigerians umbrella Christian association, in 19 Northern states and Abuja on Boxing Day charged Christians to defend themselves against violent attacks by the Boko Haram terrorist group.

CAN said security agencies must arise and carry out their constitutional responsibilities which include protecting innocent Nigerians from attacks orchestrated by terrorist groups like Boko Haram, while “calling on all Christians to be law abiding but defend themselves whenever the need arises.”

In a statement captioned: “Can Nigeria Survive A Religious War”, signed by its Secretary-General, Elder Saidu Dogo and made available to THEWILL in Kaduna, the association said, “Enough is Enough.”

Part of the statement reads, “The Nigerian nation and indeed the Christian community in Nigeria and particularly those of us in the Northern part of the country witnessed yet another dark Sunday when Islamic fundamentalist in the North rained terror on innocent, peace-loving and harmless Christian worshippers on Christmas day at St Theresa’s Catholic Church, Madalla , Niger State, and Mountain of fire and Miracle Church in Jos.

"Reports reaching us also indicate similar attacks in Damaturu the Yobe State capital. In these attacks, over hundred innocent souls were killed. We appreciate the efforts of the Federal Government and its security agents in trying to curtail these attacks. However we are piqued that the efforts of Government are being undermined by the sponsors of the Islamic Fundamentalists in the North. We are particularly disturbed that the perpetrators of these dastardly acts and their sponsors are well known to government and no serious or decisive actions have been taken to stem their nefarious activities.

“We shall henceforth in the midst of these provocation and wanton destruction of innocent lives and property be compelled to make our own efforts and arrangements to protect the lives of innocent Christians and peace loving citizens of this country. We are therefore calling on all Christians to be law abiding but defend themselves whenever the need arises.”