A REVOLUTION FOR ACCOUNTABILITY RETRIBUTION AND REDRESS 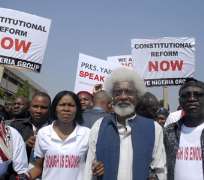 "Each generation must out of relative obscurity discover its mission, fulfill it, or betray it" - Frantz Fanon, The Wretched of the Earth .

Nigerians are smart people. There is no Primary (Elementary) School pupil who is not able to recant the famous aphorism: "You cannot teach an old dog, new tricks". Another, but less well known is: "A stitch in time saves Nine". Thank God for the internet, Nigerian Leaders cannot assume that we are all "dumb driven cattle". Resourcefulness of Nigerians is amply visible from the sheer quantity of material authored by Nigerians on the web. A current subject of discussion is revolutionary change. To be very clear, change we must. We cannot continue like this as a nation. A stitch in time will save nine hence the urgency of duty. The only issue of debate is the time, the objects and the change-agents.

Should change be evolutionary or revolutionary? There are a few Nigerians who sincerely believe that peaceful evolutionary change that does not rock the boat is what we need. They'd rather we pursue solutions that are legal, "acceptable" and gradual. "Change overnight is impossible" "Change will come Inshah Allah" they cry. Pacifists are the great friends of evil dictators and tyrants. It was "Insha Allah" that one evil dictator used to enslave not only the physical but also the mind of peace-loving Nigerians for over eight years until Allah (after thousands had perished) used late Sanni Abacha to deliver Nigerians. Abacha's simple act of drawing a gun at the Dictator's head broke the spell. The same tactics was invoked to dissolve the Dictator’s unconstitutional Interim contraption. But some Nigerians crave unearned credit for these and others.

There were others (civilians) who chipped-in to deliver Nigerians but have refused out of modesty to claim any credit. Chief Frank Kokori would be remembered and honored by posterity. Mallam Jerry Yusuf of the Movement for the Advancement of Democracy would also not be forgotten in the annals of our national democratic odyssey.

Professor Wole Soyinka, Nigeria 's famous Nobel Laureate once asserted that Nigerian youths are "docile". Perhaps that is true. I guess only to some extent. As noted above, few individuals acted to effect necessary change in the past. It is true therefore that our Youths are spoilt. This time around, there is no undertaker. All Nigerians know the issues and they know the leeches, they have the answers. The era in point are the fifty long, wasted years i.e.1960 to date. Change has not been forthcoming because, the old dog has (as expected) refused to learn new tricks. Nigerians are just "parambulating", to use late Afro Musician Fela's term. Something needs to happen to break the jinx - to halt this "one-step-forward-two-steps-backward phenomenon. The consequences of docility and dilly-dallying are too frightening to contemplate. But it is that fright that should propel Nigerians to action to effect change and move the society in the right direction.

In my pre-election piece titled "Revolutionary Change, Democratic Space and the Great Nigerian Inquisition" I made three propositions. Number one was the Imperative of Change. Number two was the need to sanitize the Democratic Space. Number three was the necessity for fact-finding enquiry. I must say, with all sense of modesty that proposition Number two has been a tremendous success. It is not over, until it is over, goes the popular saying but Nigerians have made themselves abundantly clear on who will NOT lead them to the Promised Land. I also cautioned Nigerians not to be carried away by the "free and fair" election mantra. Elections do not guarantee change nor put food on the table. It is now crystal clear to all that, even where we thought we got things right at elections, our pains refuse to go away. The incoming President, I posited, would have to either lead the revolution or else be consumed.

In view of the unfolding events, and the wisdom of the above quoted aphorisms, excerpts from the article under reference are published hereunder:

”Nigerian youths, if they ever made a sound assessment of the current state of the nation would have realized that change is imperative or slow death is sure to creep in. We have passed pre-contemplation.

We recognize that things cannot continue the way they are now. A wise saying states that only a mad man would continue to do things the way they’ve always done and expect a different result. Nigerian youths are definitely motivated at this stage. We are at the threshold of action stage and can indeed borrow a leaf or two from our North African brothers in Egypt and Tunisia whose travails are not as great as those of Nigerian youths but still struggled for liberation.

Yes, we must vote and our votes must be made to count as we insist but what is the likely effect upon our daily lives? If there is not going to be any tangible easily quantifiable impact then the exercise would have been another futile endeavour. Is it going to be "business as usual" or are we indeed, by our votes taking our destiny in our hands? Nigerians are a very simple and understanding people. You don't have to be a magician to please us. We need no foreign models or heroes. On the Civilian side Lateef Jakande has set the standard while Murtala Muhammed remains the model among Military Dictators. We demand that Nigerians must be able to feel the "dividends of democratic change" before the end of 2011.

One of the tasks before a new President to be elected in April is an examination BY COMMISSION OF ENQUIRY of how Nigeria and who and who held Nigeria down for fifty years contributing to its socio-economic and political adversity that resulted in the highly degraded pauperized state of its citizenry. Nigeria 's Ex-Dictators have a case to answer on this and it is only fair that a non-participant promulgate the inquiry. Unlike the Oputa Panel which they spurned, this one will give no room for escape. There is bound to be serious conflict of interest if an ex-dictator presides over the affairs of Nigeria in post 2011 election Nigeria .

We must examine our past to enable us chart the direction of change in the Nigerian Society. By a public inquiry, a sound re-writing of our social contract can take place. A fair basis for allocation of culpability and justice can be established. But more importantly, the oppressed and suppressed Nigerian Youths can have a say in the determination of their destiny while saying good-bye to unemployment, mass poverty, lack of healthcare, bad roads, epileptic electricity supply and other ordinary amenities of life that are taken for granted in other climes.

Ours is a revolution against waste, fraud and abuse and the vampires who have held Nigerians in political and economic bondage for fifty years. It is a revolution for accountability retribution and redress. The Nigerian Pharaohs although brutal and bloody, must bow. Our young people are already down, they need fear no fall. Truth is, we live in a predator nation - a mere microcosm of the state of nature.

We drove the Dictator away in 1993 and restored Democracy, yet life is still brutish and short. But we are now ripe for an empowerment revolution and enthronement of a welfare-driven government. Our dignity as Nigerians needs restoration. It is not light but slow death that awaits the ordinary powerless Nigerian at the end of the tunnel. Our deliverance is in our hands. We must "rebuild" Nigeria from the ruins that corrupt incompetent and tyrannical civilian and Military Leaders have made of it, we must focus on elimination of waste, fraud and abuse in governance as well as loot recovery and bringing looters to justice.

Ours is a revolution against vampires not the Egypt or Tunisia-type dictators. We have trod the path of lies, deceit and betrayal too long. We refuse to continue to walk on a famished into an endless cycle of poverty and degradation in a "dismal tunnel" that Nigeria now is. "Enough is enough!" "Let go of my people!!!"